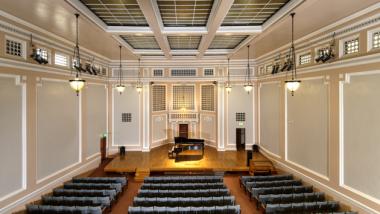 Angel Island Stories Could Use Another Hearing

The Bridge Piano Quartet, an ensemble of local musicians, has commissioned a new work, which they brought to San Jose’s Trianon Theatre last Saturday. The composer, Chad Cannon, is a young man from Los Angeles whose music often reflects Asian influences. His Gateway: Stories from Angel Island is a 25-minute piece in five movements, elaborately scored for narrator, piano quartet, recorded voices and East Asian instruments, and butoh dancer.

Musically, Gateway lies still, to the point of being almost motionless. The strings and piano hold chords or set up regular, simple rhythmic patterns that aren’t developed. The harmonies are consonant and unobtrusive. Sections and movements display variety in sonorities: pizzicato here, ponticello there, a bit of stuttering figures in one place, unresonant piano thumping in another. Recordings of various Asian plectra and percussion instruments, and at one point a chanting voice, add quietly to the tone color in various spots.

It quickly becomes obvious that the purpose of the music in this composition is to serve as, in the composer’s words, a backdrop. It’s emotional underlining to the spoken texts, and it would amount to nothing without them. The texts are what this work exists to communicate.

These “stories from Angel Island” are taken from the experiences of East Asians who passed through the immigration center on that San Francisco Bay island in the early 20th century. Angel Island, one learns, was not a welcoming place. Immigrants were held for weeks or months, cared for poorly and given inedible food, interrogated without kindness, and generally made to feel unwanted here. Comparisons to the immigration situation of today were left undepicted in the composition, but they were considered by composer and performers to be the reason for the work’s relevance at this time.

The five texts include translations of Chinese poems left scrawled on the immigration center walls and accounts in first person or mixed first and third by Japanese and Korean immigrants. Four of the texts were read by the onstage narrator, Nobuko Saito Cleary, a business consultant specializing in U.S.-Japan relations and a member of the Angel Island Immigration Station Foundation board. The fifth was a recording of the original spoken English-language reminiscence of a Korean immigrant.

Two of the movements were accompanied by butoh dancing by Judith Kajiwara, who wore baggy clothes and white body paint. Butoh is a Japanese theatrical dance style that appears, at least from this example, to emphasize emotional meaning over beauty or regular patterns in dance movement. It further underlined that this was a piece about the stories that the texts told.

The problem — and it was a serious one — is that the Trianon is not an ideal venue for performing arts with these priorities. The auditorium here is extremely resonant. It’s excellent for clear and bold display of unamplified chamber music. But the reverberating acoustics are peculiarly hard on the spoken word, even without musical accompaniment. Some may blame a poor voice amplification setup, but I have rarely heard anything spoken from the stage in the Trianon on any occasion that could be reliably understood throughout the auditorium.

The combination of the native acoustics, amplification which couldn’t overcome this, voices without crisp sonic profiles, and the simultaneous hum of the music, plus tiny print for the text in the program book and house lights turned down too far to read it, meant that only parts of the narration could be followed. This is unfortunate, for reading the text afterwards reveals fascinating stories. Cannon, speaking before the work, recommended visiting the Immigration Station museum on Angel Island, plus two books: Angel Island: Immigrant Gateway to America, by Erika Lee and Judy Yung (Oxford University Press), and Island: Poetry and History of Chinese Immigrants on Angel Island, by Him Mark Lai, Genny Lim, and Judy Yung (University of Washington Press).

The Bridge Quartet also played two purely musical works by themselves. Mozart’s Piano Quartet in E-flat Major, K. 493, actually went well with Cannon’s piece, as it’s a placid and expansive work with little drama or ruggedness in its profile. The players gave it a simple and plainspoken presentation, keeping the melodic drive going, an essential ingredient for avoiding dullness in Mozart performance.

The other work was the Phantasy for Piano Quartet by the English composer Frank Bridge. This is a single movement consisting of Andante outer sections framing a scherzo which in turn surrounds a trio. It was composed in 1910 — the year the Angel Island Immigration Station opened — and the players presented it as a modern work of its time. Even in the rhythmically alert scherzo, the players emphasized ripe impressionist harmonies by playing with evenly-paced strength across the ensemble. Like the Mozart, it moved coherently.