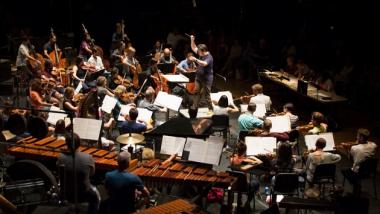 The Cabrillo Festival has yet to live up to its mission statement of “advancing music” this season. Friday’s opening-night concert at Santa Cruz Civic Auditorium offered a tame program of shockingly unimaginative orchestral fare — all composed within the last couple decades, if you can believe it.

There was one notable exception, however. I sat slack-jawed for much of Dan Dediu’s 2003 Grana, which received its U.S. premiere that evening. The Romanian composer writes music charged with kinetic, kaleidoscopic energy and that exhibits both technical virtuosity and an offbeat sense of humor. In Grana (Spanish for the deep-red cochineal pigment), he lays out a labyrinthine formal design inspired by the narrative structure of Gabriel García Márquez’s novella A Death Foretold. Paradoxically, the piece opened with a big finish — a “Finale appassionato” that resembled the climactic endings of Messiaen’s orchestral works. The movement that followed, “Meccanismi,” was a bizarre take on Bach’s cancrizans forms, with a motley assortment of contrasting sonorities arranged in a palindromic mosaic.

These structural eccentricities were mirrored in Dediu’s cartoonish musical language, which had much of the audience laughing aloud. At one point in the second movement, concertmaster Justin Bruns broke out in a squeaky, Soldier’s Tale-style march shadowed by a grotesque pairing of clarinet and muted trumpet. Trombonist Ava Ordman, equipped with a plunger mute, would interject with quacking outbursts resembling the adult voices in animated Peanuts cartoons. Near the end of the work, the melody returned as a comically macabre funeral dirge, with Bruns’s nails-on-chalkboard solo leading a procession of little ghouls and demons conjured in scurrying wind motives.

Despite all the Looney Tunes pandemonium of Dediu’s score, his countryman Cristian Măcelaru — now in his second year as music director of Cabrillo — maintained a tight sense of organization, ensuring that the sequences of wacky sound events unfolded with Rube Goldberg precision. Alternating with these musical games were more traditionally symphonic string textures along the lines of a Bernard Herrmann soundtrack or those moments of unbearable anxiety in Shostakovich’s symphonies. It made for some odd, affective juxtapositions, and it wasn’t quite clear if we were supposed to take these passages seriously — very often, Dediu would undermine the solemn tone with a flatulent trombone slide or some other prank. It kept the work from fully descending into plush sentimentality.

The same can’t be said for the two folk-based pieces played earlier in the program. I was put in mind of “Can You Feel the Love Tonight” during the second of Huang Ruo’s four Folk Songs for Orchestra (2012), with its overuse of chime tree and rain stick — as it turns out, even Elton John had taste enough not to use such schmaltzy effects. But that kind of ’90s-pop-ballad vibe permeated the first three numbers of the set. It all felt very sanitized and safe, with the timbral markers of traditional Chinese music erased to suit the taste of a Western audience. While the Cabrillo Orchestra provided a lovely reading, I would have much preferred to hear authentic folk musicians perform.

And that’s exactly what I got when, at the beginning of the fourth movement, the composer himself stood up a few rows ahead of me and began belting an a cappella rendition of the “Boatman Song from the Yellow River.” Huang, who was born on Hainan Island but now resides in the U.S., memorized over a hundred folksongs as a teenager in China. He possesses a voice that is powerful and penetrating, but flexible enough to maneuver tricky falsetto grace notes and elegantly drooping portamento at the ends of phrases. His seemingly impromptu introduction was the most captivating moment of the piece, and the raw, unbridled intensity of Huang’s performance carried into his orchestral arrangement of the song. He was more orchestrally adventurous in this finale, painting a magnificent river soundscape with woodwind birdcalls flying over rumbling, Rheingold pedal tones in the low brass. Unlike the rest of the set, the last movement seemed closer to Huang’s intention “to transform [the folksongs] into new pieces of art that contain organic originality.”

Still, I find this emphasis on folk music rather old-fashioned — a return to musical nationalism of the late-19th and early-20th centuries, or the kind of propagandistic, socialist realist aesthetic that composers were forced to adhere to in the Soviet Union and during the Chinese Cultural Revolution. It’s also a tad essentializing, as it sets up an expectation that foreign composers are somehow rooted in the music of das Volk, whether or not they actually have training in the traditions of their homelands.

While Huang did, in fact, grow up learning the folksongs he arranged, Pande Shahov only recently began researching the music of his native Macedonia in collaboration with his compatriot, pianist Simon Trpčeski. For his Piano Concerto No. 2, which Trpčeski performed in its world premiere on Friday’s concert, Shahov incorporated whirling Macedonian dances with asymmetrical aksak meters — like the 2+2+2+3 pattern that Dave Brubeck employs in “Blue Rondo à la Turk.”

Perhaps taking a cue from Brubeck, Shahov leaned heavily on jazz harmonies and instrumentation, but the work strayed dangerously far into sappy lounge-music territory, especially Trpčeski’s sparkling piano line. The soloist obviously had a good time with it (I caught him bobbing along with the music and signaling encouragingly to the orchestra), and I appreciated his improvisatory, jazz-like treatment of the rhythm in passages of mischievous syncopation or dreamy rubato. After a while, however, the endless medley of prettified folk themes blurred together — Shahov never established a clear formal trajectory — allowing the concerto to deteriorate into a generic wash of background music.

Likewise, I felt a bit at sea during Canadian composer Zosha Di Castri’s 2015 Dear Life, but at least the work presented a challenging listening experience. Some of my confusion stemmed from the various multimedia layers that vied for attention. I was often too engaged with Di Castri’s shadowy sound world and soprano Mary Mackenzie’s undulating vocal line to keep track of the Alice Munro story being read aloud — in some particularly noisy passages, the orchestra even covered up actress Martha Henry’s prerecorded narration. But I was able to get the basic gist of the text, in which Munro recounts memories of her childhood in rural Ontario.

Although much of Di Castri’s soundtrack distracted from the text it was supposed to support, there were certain points when music and spoken text lined up with compelling, almost cinematic results — for instance, the somber brass hymn and screeching string glissandi that underscored the line “The wages of sin is death.” And as Henry read Munro’s eerie account of a crazed neighbor peering through the windows of her family’s home, the orchestra slowly ramped up the tension, sliding agonizingly upward from quiet, dissonant harmonies to an aggressive percussion barrage that represented the neighbor’s knocking. The rusty-gate string harmonics in the silence that followed were chilling.

Soprano Mackenzie deftly navigated wordless sighs, trills, and wild coloratura, though her erratic vocal line made it difficult to understand the few passages in which she sang coherent text. For the most part, Di Castri treated the soprano as just another member of the orchestra; the composer might have achieved greater cohesion by eliminating the narration entirely and setting the Munro excerpts for singer only. Nevertheless, Di Castri’s music shows promise, and after sitting through an evening of undaring new works, I respected her willingness to take compositional risks.

As always, the contemporary music festival manages to squeeze a lot of adventurous music into a short time.

Foxtrot Delirium Goes Over the Edge

Composer Martin Matalon’s score for a 1919 silent film comedy isn’t meant as underscoring, and that’s part of the problem.