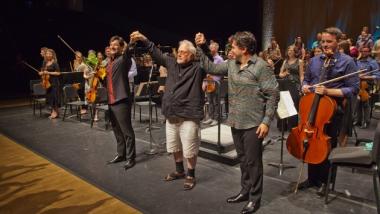 What does the term “Dixieland” mean to you? Perhaps it brings to mind New Orleans, early jazz, or the American South more broadly. On Saturday evening at the Santa Cruz Civic Auditorium, the annual Cabrillo Festival presented a program called “After Dixieland.” For me, that theme was even more ambiguous than the concept of “Dixieland” itself. Among other possibilities, I imagined not only a postmodern mix of classical and jazz, but also a charged contemporary debate about still-erect Confederate statues.

Although the theme remained elusive even after hearing the show, I can resolutely confirm that Cabrillo remains an almost magical mecca for new music. Certainly, too, the concert celebrated William Bolcom’s 80th birthday with a performance of his jazz-infused violin concerto, alongside works by two of his former students. Exceptionally, all the composers were at this festival concert. And with Cabrillo’s magic in the air, the performance managed to weave in life-affirming meditations on how — irrespective of any political climate, including the current one in the U.S. — we are all dynamic humans who, commonly and constantly, are always migrating to and from somewhere.

The evening opened with Vivian Fung’s Dust Devils, a single-movement piece inspired by the idea of emotional volatility. When Fung introduced the work, she explained that she delights in writing for orchestra partially due to its colorful palette. In this piece, the orchestra’s different colors represented emotional and cerebral swirls. It culminated with a chorale in which the brass section demonstrated it was small but mighty.

Bolcom’s Violin Concerto in D closed the first half. Listening to the composer introduce it was a special treat: This man is as humble as he is accomplished. He spoke about his friend, the violinist Sergiu Luca who premiered the work in 1984, as well as Joe Venuti, a noted jazz violinist who inspired him and the final movement of this piece.

On Saturday, the solo violinist was Phillip Quint. The first movement opens with the solo part, and Quint commanded from the start. He performed the whole piece with clean technique and nonchalant virtuosity typical of the understated brilliance of Cabrillo performers. Unsurprisingly, before intermission the audience rose to its feet for Quint, Bolcom, the orchestra, and Cabrillo’s gifted conductor, Cristian Măcelaru.

The second half opened with a short piece, not on the program, by a composer familiar from last year’s Cabrillo festival, Karim Al-Zand. Măcelaru explained the composer wrote it as a response to contemporary political debates about immigrants/migrants; he also said that our inevitable shared status as migrants helps to make humanity beautiful. Măcelaru asked for no applause after this work for string orchestra plus marimba playing a 3-pitch ostinato that, perhaps metaphorically, migrated across the bars.

The concert closed with works by two women who studied with Balcolm while completing their doctorates: Kristin Kuster and Gabriela Lena Frank. When Kuster introduced her Rain On It, she called out the thoroughly delicious unpretentiousness of Cabrillo, a quality that I wholeheartedly second. Her piece consisted of fascinating rhythmic layers, some of which sounded like rain and were inspired by her father, a meteorologist.

Frank bravely introduced her Walkabout by sharing that she grew up as a multiracial child in Berkeley, and also that, when she was studying with Bolcom as a doctoral student, he encouraged her to explore both her identity and her mother’s native country of Peru. Frank explained that she grew up in a town where diversity was normal. To her, such diversity, combined with opportunities that enabled her — someone with a hearing disability who writes music professionally — help to define what makes America great.

Even though her piece is subtitled Concerto for Orchestra, structurally it is a four-movement symphony. Written in the wake of the 2016 U.S. presidential election, Frank thinks of it as a “celebration of multiculturalism.” Memorably exotic was the last movement, which paired a percussionist playing a whistle with a clarinetist. The sound represented a tarka, an indigenous wooden flute played by Andean musicians.

Judging not only by this concert but also by my several years of visiting Cabrillo, there truly is something akin to magic in the air here: Vitality, originality, humble inclusivity, and a warm je ne sais quoi palpably radiate from this festival. If you want to hear world-class new music, or if you’re simply craving reaffirmation of basic human decency and goodness, turn off your television and migrate, however briefly, to Santa Cruz while Cabrillo’s concerts are still sounding.

As always, the contemporary music festival manages to squeeze a lot of adventurous music into a short time.