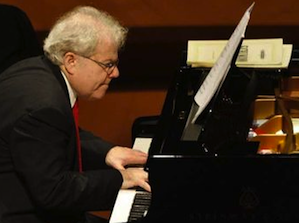 Philharmonia Baroque has just finished a rare all-Beethoven set, focused on the composer’s middle period. Even more unusual was its special guest: pianist Emanuel Ax, a performer most often seen seated at a large, shiny black keyboard instrument and just as comfortable with music composed last week as he is with a broad repertoire that spans the previous three centuries. But for this set, he was performing on a more modest fortepiano. Ax was supposed to play an instrument built by Johann Fritz at the same time as the concerto’s premiere (1807), but its hammers kept popping out of their guides, according to instrument technician Janine Johnson. Fortunately, the owner offered up a “spare” antique instrument, built by Maximilian Schott in 1840.

Conductor Nicholas McGegan’s programming decisions often surprise me, yet they are always thoughtful. For Saturday’s concert in Berkeley’s First Congregational Church, he opted to begin with the concerto rather than save it for a grand finale. He may have had pragmatic reasons behind this decision — a temperamental fortepiano, a request by the soloist, or other. But it may also have been a calculated choice, inspired by the unusual way that the concerto begins.

The Fourth concerto famously opens “inside-out”: Instead of an orchestral exposition answered by a solo statement, the piece opens with a lush but lonely eight-note chord in the middle of the keyboard, followed by a series of chords that move freely in and out of four, five, and six voices. The orchestra answers with material that is parallel, but transposed up an interval of a third. To a listener familiar with generic norms, these moves supply not one but two eyebrow-raising surprises. This is Beethoven’s way of announcing to the world that this will be no usual concerto. And indeed, it is not. Beethoven’s Fourth is epochal, one of history’s greatest contributions to the genre.

Given his unerring musical intelligence, it’s unsurprising that Ax would be drawn to performing Beethoven on a period instrument.

Ax is a fine pianist and a consummate musician. Given his unerring musical intelligence, it’s unsurprising that he would be drawn to performing Beethoven on a period instrument. The balance between orchestra and keyboard was perfect in the First Congregational venue. The instrument at his disposal was crisp and clear at both extremes of its registers, and some of the technical struggles of the third movement for modern pianists seemed mitigated by the keyboard’s action. Of course, it helps that Ax is one of the greatest technicians of his generation. He is also an affable personality, whose wit and humility shone through in his performance.

The concert’s second half commenced with music from earlier in Beethoven’s life, his Contredanses WoO 14, composed sporadically between 1791 and 1802. This is music well within PBO’s comfort zone. The dances are reminiscent of older courtly dances that make up so much of the earlier 18th-century repertoire. McGegan clearly relished the peasantlike nature of this music, inviting sudden dynamic changes and featuring the percussionist (Kent Reed) in the wink-and-nudge manner that he so enjoys.

This was the perfect music for this conductor and this orchestra, so beloved for their balance of wit and profundity.

Yet the concert’s highlight, for me, came at the end, with PBO’s sensitive performance of the Fourth Symphony. Beethoven’s even-numbered symphonies get so overshadowed by their odd-numbered siblings that it’s easy to forget that they contain some of his most innovative strokes.

The Fourth is a work in B-flat major that opens in B-flat minor and that, miraculously, finds its way to its home key via such distant tonalities as B major and A major — all in its slow introduction. The introduction is emblematic for things to come in this first movement, which is like a never-ending development section; fragments of melody punctuate its textures, but never develop into singable tunes, as Beethoven’s restless imagination carries him from one gesture to another. This was the perfect music for this conductor and this orchestra, so beloved for their balance of wit and profundity. A box of free recordings of Beethoven’s Ninth awaited us when we left the church, which raises the obvious question: When will the group record all nine symphonies?

In reviewing a period-instrument performance of a Beethoven set, I feel obliged to say something about whether the instruments — the in-between bows and the wood flutes and the like — really matter. In some ways, I suppose they do. Eric Hoeprich’s clarinet was spine-chillingly beautiful (that’s the first time I’ve ever said that about a clarinet), and the orchestral balance was interesting, with less string domination than listeners might be accustomed to in a modern execution. But such considerations were really secondary to the overall moving performance. This was fine Beethoven playing — damn fine.