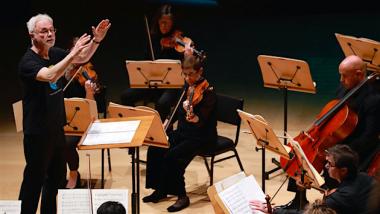 The final Green Umbrella concert of the Los Angeles Philharmonic’s centenary season was folded into the myriad musical patterns that made up Saturday’s third annual 12-hour marathon — “Noon to Midnight.”

As in every Green Umbrella concert this season, the four works on the program, three of which were conducted by John Adams, were all LA Phil commissions: Changeling by Freya Waley-Cohen; Overcasting by Donnacha Dennehy; … amid still and floating depths by Jeffrey Mumford; and Cascade by Christopher Stark.

The multitude of concerts that had taken place before the unfolding of the Green Umbrella crossed a multitude of boundary lines — from adventurous to nostalgic, from groundbreaking to irreverent in the case of the quirky “Fluxus” performances that were intermingled throughout the day.

Taken in this context, the Green Umbrella could and should have offered an ideal platform to take some chances. In the event, the concert did the opposite. In golf, I believe, it is called “laying up” when you play safe, instead of risking it all on a shot that could go terribly wrong.

With the exception of Stark’s atmospheric disturbance, Cascade, with its evocation of a cloudburst, the other three works on the program pretty much “laid up.” They were carefully crafted and stressed intersectional dynamics and instrumental coloration combined with a conscious effort to reference the past — whether it was Waley-Cohen evoking the neo-classicism of Stravinsky, or Mumford planting his musical roots deep in the thorny, serial soil of Elliott Carter.

It also appears that we have gotten to a point where John Adams, specifically his landmark Shaker Loops, is now so much a part of modern music history that it is suitable for quotation. And I was sure I detected a smile of satisfaction on Adams’s face when he conducted this passage in Dennehy’s score.

The four composers also represented an interesting age dynamic with Waley-Cohen the youngest (born in 1989) a child of Radiohead and post-minimalism, to Mumford (1955), whose 12-tone harmonic language still presents challenges. Dennehy (1970), who hails from Ireland, follows parallel musical paths, like so many younger composers today, creating one style of composition for the orchestral world, and a decidedly more electric, high energy, “rock” influenced style for his band, Crash.

A sense of quicksilver mood shifts and instrumental shape shifting permeated Waley-Cohen’s Changeling. The title is meant to reference the fairy forest magic of Mendelssohn’s A Midsummer Night’s Dream with the piano and strings providing a dotted, motoric rhythm reminiscent of Stravinsky. The mood shifts often and rapidly from rumbles of discontent to quieter moments when we can hear the chimes of midnight.

The atmosphere and overall instrumentation of Dennehy’s composition was so closely akin to Waley-Cohen’s it felt like the the second movement of a single work. Inspired by a form of Irish folksong, Dennehy describes it as, “a pulsating organism that kept shifting in and out of an overtone-based focus.” At the same time, the minimalism pulses quoted John Adams, while his tectonic shifts referenced the other Adams. John Luther.

After the contemporary flair of Dennehy’s piece, the carefully crafted dissonance and barbed textures of Mumford’s composition, even though it was expertly played by Mivos Quartet, felt like a throwback to a bygone musical age.

The most imaginative piece was saved for last — Stark’s Cascade. It begins with the recording of a storm. First a few raindrops fall. Then the intensity builds until the entire auditorium felt like it was immersed in an all-out cloudburst.

Like John Luther Adams, Stark is from the Northwest, and both composers are heavily influenced by the forces and rhythms of nature. As Stark explains, “I have been pursuing a musical language that attempts to invoke notions of what I consider to be ‘natural’ or ‘organic.’” The work, he writes, is meant to evoke a walk in the Cascade Mountains with its rushing waterfalls by combining sampled and layered recording with the instrumental performance. It all ends with a gentle breeze, in which four trumpets are literally transformed into wind instruments.

In a serious sin of omission, the Philharmonic’s failed to distribute a proper program that contained the composers’ notes, so no one had the benefit of reading what the composers had to say about their creations.

It’s been quite a ride to follow this season of probably-never-to-be-repeated world premieres commissioned by the LA Phil. It would have been fitting had this last Green Umbrella concert could have been a concluding triumph. As it was, it missed the jolt of energy that Dennehy’s band probably has no difficulty summoning.