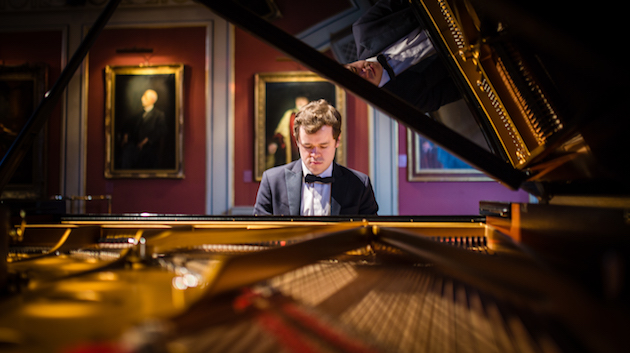 British pianist Benjamin Grosvenor has had a meteoric rise. Merely 26, he was discovered as a prodigy, featured in two BBC-produced documentaries, and has been heard in the most prestigious concert halls in the world.

It has been six years since his San Francisco debut performance, and the fortunate audience at his Steinway Society concert in Saratoga had the privilege of witnessing how he has matured.

From his earliest years, Grosvenor has consistently demonstrated an exquisite sense of lyrical lines balanced with counterpoints and accompaniments. In this performance, his singing line was clearly drawn, delicately balanced above the bass counterpoint and syncopating inner voices in Schumann’s seldom-heard Blumenstück, Op. 19. There was the uncanny illusion of an ensemble with different voices, carefully laid out through utterly precise control of the tone. The tempo was relaxed and elastic, though hardly stretched or distorted. The subtle undulation of the rhythm emphasized small climaxes. The modest technical challenges did not inspire laxness: Grosvenor polished every note to a mirror finish. It was signature Grosvenor.

Schumann’s Kreisleriana, Op. 16 followed, and Grosvenor displayed deft ability to maneuver through Schumann’s bipolar miniatures. From an angelic hymnal to violent storms, he gave clear individual identities and stories to each of the works. His playing gave a glimpse of both the composer’s tortured and conflicted inner soul and also his sense of serenity at other times.

Selections from Prokofiev’s Visions Fugitives, Op. 22 in the second half of the recital provided a mirror-image to Kreisleriana. Grosvenor picked 12 of the 20 miniatures contained in the collection, rearranging their order to better maintain cohesion. Here, Grosvenor’s signature style was omnipresent. Notes in dissonant chords were balanced so that they either emphasized specific intervals or brought out lines  through the kaleidoscope of colors in the score. Such attention to details augmented the experience of hearing those miniatures, some of which last merely a minute.

Janáček’s piano sonata 1.X.1905 (“From the Street”) preceded Prokofiev. After the long intermission, the audience was transported to a bleak, bloody scene where a political demonstrator was bayoneted to death. The eerie scene, laden with grief, was depicted vividly through the contrast between the melody — said to mimic the intonation and rhythm of the spoken Czech language — and the moments of breathing space (or perhaps dejection) in the second theme. The second movement, titled “Death,” brought forth all the possible emotion from witnessing the murder itself: anger, tortured pain, and a prayer. The rhythmic tension in the score depicting panic-driven hyperventilation and overloaded emotions was rendered impeccably. The heavy thuds heard throughout the second movement seemed to represent the cold, stone steps where the demonstrator took his last breath.

Absent throughout the recital up to this point was a display of gratuitous showmanship. The audience hungry for pyrotechnics was finally rewarded with an exuberant interpretation of Liszt’s Réminiscences de Norma: Grande Fantaisie. The flamboyant score that demands all the tricks in a pianist’s drawer was interpreted not for its excesses, but for its structure. While it is tempting for many pianists to indulge in the arpeggios that span the entire width of the keyboard with gusto, Grosvenor kept his cool, delivering the pyrotechnics cleanly with ease and even subtlety. In some parts where the left hand works on the melody while the right hand adds embellishments, he maintained focus on the melody rather than an excessive display of velocity. Such an elegant interpretation was quite refreshing.

As if the Liszt wasn’t enough to bring the audience to its feet, Grosvenor gave two exuberant encores: the warhorse Moritz Moszkowski Etude in A-flat Major, Op.72, No.11, and a vibrant and perhaps aggressive, for Grosvenor, interpretation of Danza del gaucho matrero, Op. 2, No .3 by Alberto Ginastera. The latter, peppered with performance directions such as violente (violent), mordento (biting), and selvaggio (wild) showed Grosvenor’s virtuosity while balancing subtlety and bravura.