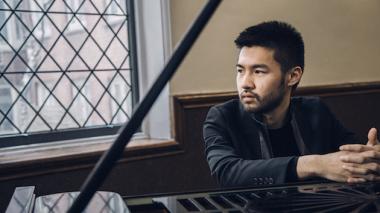 The pianist Conrad Tao first knocked socks off Berkeley audiences several years ago, when he was still a child prodigy. Now at the ripe age of 23, Tao did the same on Thursday by performing not one but two astonishingly difficult pieces at Zellerbach Hall with the Berkeley Symphony. New works by Rene Orth and Anna Clyne completed the program, which was led by a dynamo guest conductor, Gemma New.

Clocking in at under five minutes, Chasing Light (2015) was a dense — and intense — fire-starter. Orth explained she wrote this orchestral work when she was still a student at Curtis and had a lot going on, largely because she was simultaneously finishing her chamber opera, Empty the House. She represented that sense of being swamped in Chasing Light largely via fervent strings and inexorable percussion. The title refers to the proverbial “light at the end of the tunnel.” That said, the ending surprised — it reminded me of that heavy feeling of waking up after a sleepless night. The piece captured not only the infinite energy of youth but also ageless, relentless anxiety.

The drama continued in Rachmaninoff’s Rhapsody on a Theme of Paganini. This piece is interesting partly because it frequently demands awe-inspiring, overpowering virtuosity, just as knocking down a wall requires a sledgehammer. At others, though, it calls for restraint, like in the first variation, where Tao delicately highlighted important notes as though he were a teacher patiently instructing his audience in what to listen for. A risk-taker with staggering technique but also a wide emotional range, Tao radiantly ran Rachmaninoff’s gamut. An innate soloist, he commanded attention even when blending into the orchestral palette or thoughtfully playing the accompaniment, like in a variation that featured the oboe.

Without seeming deliberately histrionic, Tao was also a delight to watch. His assured, resolute musical ideas voraciously reverberate beyond his fingers and through his entire body. With his commanding performance of Rachmaninoff’s thrilling audience-pleaser, Tao earned an immediate standing ovation.

Clyne is Berkeley Symphony’s “Music Alive” composer-in-residence. Gemma New — a powerful and unique presence, like a cross between a dignified unicorn and an exuberant sprite — introduced Clyne’s Abstractions (2016). The composer often interacts with other art forms. And this work’s five movements were each inspired by five dissimilar visual artworks, which were reprinted in a glossy program insert.

The first movement, “Marble Moon,” conjures a moon variously seen or eclipsed. It was wind-heavy and subdued, albeit not wholly serene. For a change of pace, “Auguries” was full of sawing strings and sudden crescendos. The following two movements were inspired by water: “Seascape” and “River.” But arguably this piece saves the best for last. The final movement, “3,” is based on a squiggly oil painting by Brice Marden. Clyne gave her musical lines a perplexing, neo-Baroque air; New called this movement a Passacaglia.

Tao rejoined the symphony to close the concert with Liszt’s Totentanz (“Dance of Death”). Like the Rachmaninoff, this work incorporates the Dies Irae (Day of Wrath), a hymn about the Last Judgment that is also used in Requiems. It sounded especially ominous when Tao played this tune in his left hand underneath mind-blowing flourishes in his right.

There were moments of respite, such as a solo piano section that sounded like how floating feels. Mostly, though, the physical force — the sheer amount of sound Tao managed to wrest from the piano — was staggering. For an encore, in fact, Tao half-joked he wanted to prove he could play softly.  He chose a Scarlatti sonata, the A-major K. 208. This lovely piece sounded like a satisfied sigh after an exhausting day.

From Tao’s talent to fresh sounds by Orth and Clyne to New’s lively conducting, this performance was buzzing with vitality. Even though the pieces by both Liszt and Rachmaninoff toyed with a tune that evokes death, this program invigorated and exhilarated.

Correction: The article as originally published had an erroneous caption/credit line on Anna Clyne's photo. We regret the error.