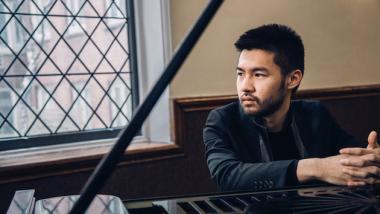 In its 68th season, the Peninsula Symphony continues to thrive under the baton of its long-time conductor, Mitchell Sardou Klein. After a shocking setback in 2013, the orchestra has recovered and continues to draw an enthusiastic audience in San Mateo and Santa Clara counties. A part of its successful recipe appears to be a combination of its programming and featured soloists invited to perform with the orchestra.

The season features works by living, women composers. Even though the glass ceiling is beginning to crack, Klein maintains that there is a wealth of works by many women composers that remain unheard. As with many contemporary works, they are often forgotten after a few performances. While Klein is proud of the fact that one of his former assistant conductors, Sara Jobin was recently appointed as the music director of the Toledo Symphony and Opera, he says audiences are still being denied exposure to women artists.

The season’s opening concert began with a bang: Carolyn Bremer’s beloved Early Light (1995) has been a staple in the concert band repertoire at high schools across the nation, and has enjoyed staying-power for two decades. However, it was originally composed for an orchestra the Peninsula Symphony players brought out its festive fanfare, and danced in its complex, Bernstein-like polyrhythms. But the real explosion was yet to come.

American pianist Conrad Tao has been making waves for some years, even though he just turned 22 this year. He is a recipient of multiple awards, including the prestigious Gilmore Young Artist award, and was named a Presidential Scholar in the Arts. While his contemporaries are just beginning to gain exposure, Tao already has had a decade-long international career as a pianist, a violinist, and a composer.

The performance of Schumann’s Piano Concerto in A Minor gave a clear indication that Tao is seeking his own path, away from orthodoxy. He made an explosive entry, but gave a dark, melancholic reading of the wistful theme. With clear, articulate lines, Robert Schumann’s passionate ardor towards Clara was expressed with determination, through deliberate tempos. Rather than letting the music be overly sentimental, rendering it a torrent of rage, Tao illustrated its volatile, bipolar personality with an unusual level of clarity and dryness. It almost felt as if the music gave a third-person account of the composer, rather than the music being by Schumann himself. Tao’s fresh perspective laid strong emphasis on the music’s architecture.

Tao confessed to me that he is not satisfied being “just a pianist” but takes inspiration from multi-faceted artists such as Stephen Hough and Marc-André Hamelin. Both Hough and Hamelin are well known as composers, as well as being regarded as among today’s foremost pianists, and have incorporated their own compositions in their recitals. That was the norm up to the late 19th century, when increasing specialization began narrowing the path for artists. Tao says he misses the spontaneity and license afforded only to composer-players

Tao cranked up the volume knob up to “11” by offering Elliott Carter’s Caténaires (2006) as an encore, as he did earlier this year in a concert with the Berkeley Symphony. The rendition of the extremely fast chain of rapid-fire notes, encompassing the entire range of the instrument with polyrhythms and sharp accents was a hyper-vibrant kaleidoscope of the digital age in fast-forward, though Tao nonchalantly reminded the audience that Carter was 97 years old when he wrote it.

If Tao’s performances weren’t enough to satisfy the audience, the Peninsula Symphony delivered convincingly loving portraits in Elgar’s Enigma Variations following a “surprise” that was Elgar’s Civic Fanfare (Hereford) and God Save the King. A projection screen to the right of the orchestra showed the portrait and a brief description of the subjects of the 14 variations. From the wistful opening theme to a tender yet passionate portrait of Elgar’s wife, Caroline Alice Elgar, Klein vividly characterized the music. Oboe and flute brought humor in the third variation; “Nimrod,” after Augustus J. Jaeger, a music editor of Elgar’s publisher, was particularly reverent and respectful. The finale was exuberant yet conflicted in a way that seemed just right as Elgar’s self-portait.