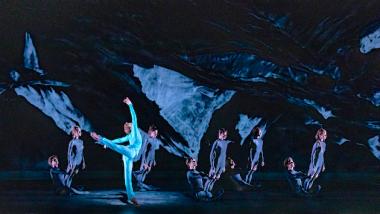 Big Night: The Royal Ballet and LA Phil Take On Adès/McGregor (and Dante)

Just when you thought it was safe to settle into the summer ritual of picnics and fireworks spectaculars at the Hollywood Bowl, the Los Angeles Philharmonic comes up with a way to keep its monumental centennial season of world premieres going.

The concert, which represents a complex collaboration between the LA Phil, London’s Royal Ballet, Company Wayne McGregor, and Glorya Kaufman Presents Dance at the Music Center, did not, however, take place at the Bowl or Walt Disney Concert Hall. For only the second time since its big move to Disney Hall, the orchestra found itself back in the pit of its former home, the Dorothy Chandler Pavilion. And what a visit it was.

The event, “Adès & McGregor: A Dance Collaboration,” was presented Friday and Saturday. It consisted of a triple bill of dance pieces choreographed by Wayne McGregor to music by Thomas Adès (each an LA Phil commission). McGregor’s choreography transformed Adès’s violin concerto, Concentric Paths, into Outlier, which was premiered in 2010 by the New York City Ballet. The seven-movement piano concerto In Seven Days (2008) became Living Archive: An AI Performance Experiment (commissioned by the Google Arts & Culture Lab, Paris).

But the eagerly awaited climax to the performance was the world premiere of Inferno (part 1 of The Dante Project, McGregor and Adès’s exploration of Dante’s Divine Comedy. The entire program was conducted by Adès, with the added star power of violin soloist Leila Josefowicz and pianist Kirill Gerstein.

On May 10, Gustavo Dudamel conducted the musical premiere of Inferno at Walt Disney Concert Hall, a score that vividly depicts Dante’s descent into Hell and his encounters with the damned and their various punishments. In his program notes, Adès offered a dedication to Franz Liszt, “the composer of Hell and demonic music.” But Adès’s ebullient score also evokes ballet music by Tchaikovsky, Rimsky-Korsakov, and Prokofiev. There’s even a wild, tongue-in-cheek romp worthy of Offenbach’s Orpheus in the Underworld.

Despite, the success of their collaboration, Adès and McGregor differed on whether to denote Dante’s chapters for the audience. Adès felt it was important to include the titles in the program. When I asked a representative of the company why the 14 chapters were not included in the program, his response was that it was the choreographer’s decision. This eliminated the bridge between Adès’s music and Dante’s encounters and turned McGregor’s ballet into an impressively danced but abstract experience. For those wondering, here are the titles:

I: The Portal – Abandon Hope; the gateway to Hell
II: The Selfish – who run with banners, stung by wasps
III: The Ferryman (La lugubre gondola) – who rows dead souls across the river Styx
IV: Pavan of the Souls in Limbo
V: Paolo and Francesca – the adulterers: the endless whirlwind
VI: The Gluttons – in slime
VII: The Suicides – bleeding trees, mauled by harpies
VIII: The Deviants – crawling across burning sand
IX: The Fortune-tellers (flatterers and critics) – walking in two directions, their heads bent back, tears running down between their buttocks
X: The Popes (the politically ambitious) – stuffed head-first down a hole, one on top of the other
XI: The Hypocrites – weighed down by coats of lead
XII: The Thieves – who transform endlessly into giant lizards and back again into thieves
XIII: Satan – in the frozen lake. Dante and Virgil climb out of Hell and see the stars

No one expected McGregor and his designer Tacita Dean to portray red devils with pitchforks. Instead, they created a monochromatic Hell where 31 dancers dressed identically, as if they were all covered in ashes. Only two characters, Dante (Ed Watson, in a turquoise costume) and Virgil (Gary Avis in orange) were differentiated.

All three of McGregor’s ballets were abstract by design, blending the broken line angularities, octopus-like partnerings, off-kilter balances and contrasting pairings of modern dance with perfectly executed fluid extensions, reach-for-the-sky flexibility and perfect ensemble cohesion. But Adès’s music supplied McGregor with a banquet’s worth of ideas, which he basically chose to ignore. Less is not necessarily more.

A Pair of Danced Concertos

Outlier, which opened the concert, is McGregor’s evocation of 1970s minimalism. It clearly harks back to the spirit (and movement dynamics) of Merce Cunningham and the music of John Cage in the way it blends diverse movement patterns with Adès’s spiky violin concerto (expertly executed by Josefowicz). I suspect that, in the style of Cage and Cunningham, the choreographic interrelationships between the 11 dancers and Adès’s music were meant to be as much by chance as design.

Set against a background of concentric circles in the style of a painting by Josef Albers, the dancers appear in various configurations and geometric spatial relationships. Thematic connections, however, are left entirely to the eye of the beholder. The one stunning exception (set to the concerto’s slow central movement) was a gracefully intertwining pas de deux danced by Sarah Lamb and Joshua Barwick.

It’s not surprising that the Google-commissioned Living Archive embraces digital media and Big Data. Everything about the piece exudes a sense of youthful street culture (satin jackets and workout wear) as dancers swirl, collide, leap, and contort before a massive glowing screen of blindingly bright LED lights that depict endless streams of data. It may have pleased Google, but it was also a distraction.

I came away from the evening impressed by McGregor’s movement vocabulary but disappointed that he hadn’t made more out of Inferno. The real star was Thomas Adès’s music. Like a Picasso or a David Hockney, these three pieces demonstrate his imaginative range. Just hearing him conduct these three, totally different compositions with the Los Angeles Philharmonic bringing them to life, was satisfying.

John Adams, Yuja Wang, and the LA Phil Give the Devil His Due

The premiere of Adams’s new piano concerto is devilish fun.