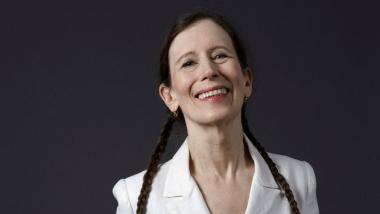 For three years, the man described as the Los Angeles Philharmonic’s “Disrupter in Chief,” Yuval Sharon, has been launching opera projects that not only think outside the box, they question whether there even needs to be a box.

But all the while, Sharon was working on a secret agenda. Long before his appointment to the LA Phil, Sharon had been in discussion with the pioneering composer/ performer Meredith Monk. His goal was to create a new production of her journey of discovery opera, Atlas, which had not been seen since its premiere at Houston Grand Opera in 1991.

Saturday, after seven years of conceptualization, “Atlas” received a spectacular new staging at the Walt Disney Concert Hall that Sharon said represented “the culmination” of his tenure with the orchestra. It also put the final exclamation point on the LA Phil’s centenary season, the likes of which may not be seen for another 100 years.

A major reason why Atlas lay dormant for so long is that Monk had controlled every aspect of the production. She had trained a cast of singers to intone her phonetic harmonies in place of traditional dialog, execute her complex rhythmic structures and extended vocal techniques, as well as her vocabulary of choreographed body movements. She had also starred as the adventurous young woman, Alexandra Daniels (of Rockport, IL), who sets out on a worldwide quest for adventure and self-realization — part Gulliver’s Travels part Siddhartha.

It took a real leap of faith for Monk to trust Sharon to create his own vision of her opera. But she did, and the result is astounding — not just as a fantastic individual achievement, but to make a case that Atlas deserves a place in the operatic repertory alongside Einstein on the Beach

To Infinity and Beyond

As the audience entered the auditorium, they were confronted by an enormous sphere of planetary proportions, 36 feet in diameter, designed by Es Devlin. Beneath it, a young girl, Alexandra (sung by Milena Manocchia) was drawing a map of the world on the floor of her room. As she delineated the oceans and continents her rendering was simultaneously projected on the hovering orb, offering a first taste of the visual wonders created by projections designer Luke Halls.

In order to accommodate this massive set piece, the Philharmonic actually removed the entire first tier of orchestra seats to create the equivalent of a pit, which was occupied by 15 members of the LA Phil New Music Group conducted by Paolo Bortolameolli  (who became the orchestra’s assistant conductor in 2016). In addition to traditional instrumentation, Monk’s score calls for an exotic ceremonial-sounding bamboo saxophone, two synthesizers, a vast array of percussion instruments including a lion’s roar, a sheng (Chinese wind instrument), and an alto bassanello (a Renaissance double reed woodwind).

In the 1991 premiere, Monk conceived her own style of movement patterns to convey the meaning behind her mostly nonverbal libretto. The 2019 production was choreographed, by Danielle Agami, with a combination of expressive body language and more abstract, ensemble dance movement.

The opera is divided into three parts: “Personal Climate,” “Night Travel,” and “Invisible Light.” It is a travelogue to exotic lands where lessons in cultural acceptance are learned, perilous adventures are undertaken against beings both realistic and fantastical, where comradeship succumbs to pressure, leading to the ultimate achievement of a serene sense of global consciousness.

Sharon and his cast bring Monk’s creation into a present-day state of awareness, particularly as it relates to the threat of climate change. And in the opera’s most transcendent scene, “Earth Seen From Above,” Monk’s ethereal harmonies, sung by a disembodied chorus, filled the hall as the great orb became the Earth, glorious and unique, slowly spinning in space.

A fellow traveler with Philip Glass and Steve Reich, Monk’s musical fabric is based on minimalist principles of repeated pulse patterns, complicated, interweaving harmonic structures, and extended vocal techniques that combine sweet lyrical melodies (you can easily come out humming) with bird-like leaps, trills, and twitters. There are arias, duets, ensembles, and a full chorus. But if there is one mood that permeates Atlas, it is sweetness and a belief in a global harmony.

The nonhuman star of the production was the giant orb. Its outer skin provided the surface for endless projections, while its interior was like a Chinese puzzle that opened to reveal interior spaces that become everything from the cabin of a high-flying jet to the frozen realm of the Ice Demons.

The costumes were by Emma Kingsbury, the atmospheric lighting was by John Torres. But it was Sharon’s vision that made it all work. Monk made a wise choice in trusting him.

The LA Phil stages a “staggeringly ambitious production” of the groundbreaking opera.

How fitting that Monk’s longtime interest in interdisciplinary art should result in a multimedia piece about cooperation.

Spielberg Gets It Right With West Side Story