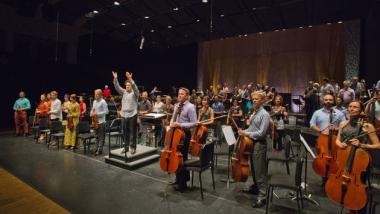 The Saturday concert of the Cabrillo Festival’s second weekend was titled “Notes from a Journey.” Perhaps that was an allusion to geographic elements in a couple of the evening’s offerings, but it seemed to me that three of the five pieces presented at Santa Cruz Civic Auditorium were united more by the intense visuality of their inspiration than by anything specifically place-oriented.

Each of these three pieces consisted of a set of sharply contrasting portrait-painting tableaux, each picture lasting two to four minutes and itself uniform in content. They’re all basically consonant, busy-sounding when they’re not being consciously still, careful to employ all sections of the orchestra including plenty of percussion, and intelligently composed. All three works were written within the past seven years by composers now in their late 30s, the same age group as Cabrillo’s music director, Cristian Măcelaru.

The contrasting tableau effect was most obvious in Anna Clyne’s Abstractions, a suite of five separate movements, each inspired by a piece of contemporary visual artwork: a painting, an etching, a lithograph, and two photographs. The art doesn’t change as you look at it, and neither does any one of Clyne’s movements over the duration of listening to it. A work of visual art can be full of activity, however, and so can Clyne’s music. And both visual and musical art can contrast greatly between works or movements.

Three of Clyne’s chosen art pieces are austere abstracts. For these she has written fast and busy music, the pieces respectively — in the words she used in her pre-performance comments — chaotic, energetic, and dance-like. She conjured up impressive variety from three movements all based on complex string runs. The successors to chaos became increasingly coherent. The final dance contained minimalist-style cellular phrases without minimalist technique, attached to a strong triple rhythm without heavy beats.

The photographs on which the other two movements are based are stark and simple, one of moonlight and the other a seascape. For these, Clyne wrote gentle, serene, and lighter music with more prominence to the winds.

Andrea Tarrodi offered a similar set of six panels, with more prominent contrasts, in her tone poem Liguria. The first panel is dominated by the brass, the second by English horn with other winds added, and the third by strings. The rushing waves of the first, peacefulness of the second, tenseness of the third, and scherzando of the fourth also show immediate contrast. Although the work is a single movement, there are no transitions between the sections. This emphasizes the tableaux-like feeling of the music but belies the premise of a walking tour of villages on the Ligurian coast. I also wonder if a series of villages along the same shoreline support such extreme contrasts in mood.

Sean Shepherd’s Melt is slightly different. This is the third recent musical work I’ve heard in the last year depicting natural ice melting. Composers’ awareness of climate issues, and the strong impulse they feel to depict this in music, seems to be widespread. Shepherd puts more transitional music into his single movement than Tarrodi does, but in the context of Tarrodi and Clyne, it can be viewed as having a tableaux-like structure.

Shepherd begins with glacial ice, which melts, falls into the ocean, and comes to rest in the abyss of deep waters. Both opening and closing are still panels with held chords, the opening high and dissonant with twittering clicks added, the closing lower, soft, and consonant, with fading percussion chords. In between come two sections of chaotic figures and rushes, with faint echoes of Ligeti in “Drowning” and of Copland in “Liquid.”

The remaining two works were of different character and were by younger composers.

Peter S. Shin, who turns 27 this year, was represented by the premiere of his first professional orchestral commission. Hypercolor is a brief work depicting, as Shin explained in his pre-performance comments, his struggles with stress-related insomnia. A string quartet repeatedly plays a rising scale signifying drowsiness that inevitably gets cut off by an abrupt crashing chord from the orchestra. Shin is a master of bizarre instrumental sounds. Creaks, groans, whistles, squiggles, squeals, and squeaks littered the music, often abruptly and humorously dying away.

The other young composer was John Corigliano. He’s 80 now, but he’d just turned 30 when his Piano Concerto was first performed in 1968. As with Shin, it was the first time he’d heard his own orchestral music played professionally. Revived today, the concerto proves to be a big work in four movements, but it’s modestly scaled and not a flamboyant showpiece. Soloist Philip Edward Fisher played lightly with a ringing tone, taking what virtuoso passages he was offered with relaxed ease. The orchestration, as colorful as in the more recent pieces on the program, was skilled, though the music sounds quite different from more mature Corigliano works. Despite the presence of atonal and 12-tone elements, Corigliano had not signed up for the Webernian aestheticism popular at the time. His music in the concerto resembles the classic American populist style of Copland and Bernstein with a harder edge, and with occasional hints of Russian flavor in the winds.

Throughout the concert, the orchestra under Măcelaru’s direction demonstrated admirable discipline and clarity. Applause was more respectful than enthusiastic. Another concertgoer remarked that he’d have liked to hear some booing: at least that would be a strong response. I replied that such a reaction would require some bad music, and that can be hard to find at Cabrillo. Apart from Shin’s Hypercolor, which for its brittle weirdness and humor stood by itself, everything at this concert was of similar mien. It was all good, but only one piece revealed true quality. From its first notes, the accomplishment and powerful assurance of Clyne’s Abstractions stood out far above the rest. I’ve had a similar reaction whenever I’ve heard a work of hers performed. I’m starting to conclude that Clyne is one of the great composers of our time.