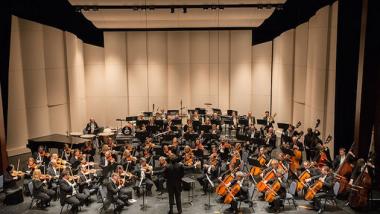 Whoever titled the California Symphony’s season finale yesterday was being modest. An afternoon advertised merely as “Something Old, Something New” conjures a pro forma set aimed at keeping tickets moving. Instead, at the Lesher Center in Walnut Creek, contemporary composer Katherine Balch introduced a dense and sculpted world premiere, a globally admired soloist — Haochen Zhang — electrified a Brahms concerto, and the orchestra under Music Director Donato Cabrera surged through the concert with astonishing assurance and intricacy.

A handful of attendees predictably giggled or rolled their eyes as Katherine Balch, recently minted composer-in-residence with the California Symphony, joined concertmaster Jennifer Cho to demonstrate some of the extended techniques that would feature in like a broken clock, Balch’s new work. Even Balch herself betrayed a slight diffidence as she enjoined us to listen very closely to hear Cho patter near-silently with her fingers on the body of her violin.

Balch’s music suffered from no such self-effacement, however. The clock-imitative gestures materialized as the background, but in a decidedly non-mechanistic and warm manner: Any expectations of clanking gears or misanthropically complicated rhythmic structures were thwarted. Balch’s flittering string devices reminded me of the origami-delicate writing found in the quartets of Georg Haas, one of her teachers. Superimposed on this, though, wild brass glissandos and a healthy sprinkling of jazz harmony lent the piece a surprising levity, especially in light of its technical complexity. Balch has the ability to compose intellectually stimulating but emotionally transparent textures, of which a tight-voiced, legato string ascent before the climax provided the most shining example. The combination of buoyant absurdity and full-throated catharsis developed her source text, an intimate Joanna Newsom song whose clock is of the cuckoo variety, very aptly.

The giddiness and quality continued as Cabrera led the California Symphony in balanced but roaring readings of both Sibelius’s Symphony No. 3 and Brahms’s Piano Concerto No. 2. One of the violinists unwittingly summed up my feeling for the orchestra’s vivacious engagement when, during a break from his own playing, I noticed him rocking his head and almost dancing in his seat with an ear-to-ear grin as he enjoyed a colleague’s cello line.

The convivial lack of stuffiness and youthful tenor of the afternoon only made the performance itself better. Even from a very close orchestra seat, the meticulously calibrated weight of each instrument section and the distinctness of individual parts consistently impressed, especially during the romantic slow movement of the Sibelius, whose legato string writing brought Balch’s best passage back to mind. Gustav Mahler apparently once told an orchestra that he wrote as if each performer were a soloist and he expected them all to treat their parts that way; whether Cabrera uses a similar line to elicit such quality performing from his orchestra, I don’t know. Perhaps they don’t need to be told.

Haochen Zhang certainly didn’t need any advice either, as he thundered through Brahms with an enthusiasm and physical investment that had him dripping sweat before the first movement drew to a close. Despite the heft of the Brahms concerto — a deep work, stretching upward of 50 minutes, almost none of it sparsely or simply written — as I drove home I could not stop singing a different music, much more tender and reticent. It was Zhang’s encore, which he played after Cabrera goaded him on: a magisterial performance of a lilting Debussy prelude at an excruciatingly slow tempo.

Many years ago a former teacher of mine had the good fortune to see Vladimir Horowitz perform Alban Berg’s brutal Piano Sonata. My teacher recalled that Horowitz chose Schumann’s childlike Traumerei as an encore — a lesson, he said, in the most essential trait of the true artist: restraint. That balance of craft and tact was everywhere apparent on Sunday.

Young Naumburg Winner Albert Cano Smit: From the Formal to the Uncanny