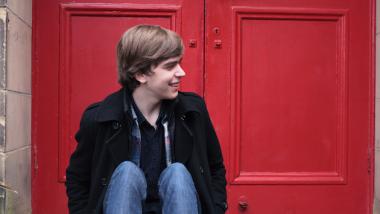 Young Naumburg Winner Albert Cano Smit: From the Formal to the Uncanny

Music competitions, despite the criticisms against them, do create a spectacle, as performer-gladiators expose themselves to microscopic scrutiny. It is indeed a peculiar and cruel environment.

Naumburg Competitions, held in New York City for nearly a century is of a different kind altogether. Established in 1926 by the Walter W. Naumburg Foundation, it has consistently identified some of the most intriguing talents such as Jorge Bolet (1937), Andrè-Michel Schub (1974), Nadja Salerno-Sonnenberg (1981), Stephen Hough (1983), and, more recently, Axel Strauss (1998) and So Yeon Lee (2010). Not all Naumburg winners have become  superstars, of course, but they are all unique.

As an annual tradition, on Wednesday donors and subscribers of the San Francisco Performances had the opportunity to hear the most recent winner of the venerable competion: Albert Cano Smit, the Swiss-born, Spanish pianist who was awarded the first prize in 2017.

Smit opened with a meticulous reading of several fugues from J.S. Bach’s Art of Fugue, BWV 1080. Subjects were introduced clearly, and countersubjects assumed distinct voices, as if performed on multiple instruments. The architectural beauty within the work was clearly presented, with nothing out of place. The audience witnessed a genius at work.

Smit exercised an uncanny level of control over the attack to each note. In pianissimo, Smit polished away the percussive elements, leaving the illusion that the piece was being performed on a pipe organ. Combined with carefully placed use of the sustain pedal for resonance, the experience was evocative of listening to an organ performance at a distance. Smit was clearly indulging in the rich colors that were available in quiet passages. His extraordinary attention to details, and his onstage demeanor was reminiscent of Glenn Gould.

Smit continued with the organ-like atmosphere with César Franck’s Prélude, Chorale et Fugue. The opening prelude was free-flowing, as if improvised. The lyrical line pierced through cascading arpeggios while the contrasting choral sections were sombre and solemn. Yet, this being a Romantic work, the crescendo came in gigantic waves. The fugue, like Bach’s, was presented with clear, distinct colors, yet in its climax, all stops were pulled to let the glorious harmony cascade down.

The second half of the program began with a pair of études by György Ligeti, gaining popularity among young pianists at competitions due to their extraordinary challenges. Smit began with No. 15, “White on white” written entirely on white keys save for the last chord. Listening to successive three note chords in the first section, I began to wonder whether Smit experiences synesthesia. He appeared to assign different tonal qualities to different notes, while threading the chords together by looking for lyrical lines, not explicitly indicated in the score. This section was strangely serene; then the polyrhythmic, fast section was rendered as a cascade of distinctly colored notes.

The infamous, No.13, “L’éscalier du Diable” (The devil’s staircase) lacked the rhythmic tension indicated in the score, because of over-pedaling, even where the composer specifies “quasi senza pedale,” or almost without pedals. Rather than each of the eighth-notes representing a frantic step in a desperate attempt to escape the underworld, the overall effect was blurred, almost nauseating, diminishing the terror in the Shepard scale (an illusion where an ascending chromatic scale never seems to reach higher). Also, the extreme dynamic range  (the score indicates as many as eight fortissimos) was restrained.

Sanity returned in Robert Schumann’s Humoresque, Op. 20, relatively speaking. The opening section possessed an exquisite lyrical line, floated above the accompaniment. As the piece progressed increasingly to a questionable state of mind, Smit sanitized the psychosis and capriciousness in the music. Certainly, his rendition was well organized, with clear lines but there were few surprises, and he missed opportunities.

In all, however, Smit attended to the fine details. He is still at a stage where he is exploring and experimenting while continuing his studies at The Colburn School in Los Angeles. I hope to hear him again soon.

Refinement Trumps Drama With Paul Lewis and the S.F. Symphony