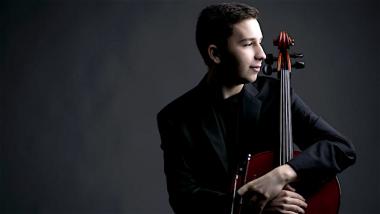 On a brilliantly sunny, breezy spring day in Marin, it would be hard to fault most weekenders in the North Bay for spending their afternoon outdoors. In addition to the scenery, though Marin boasts a robust symphony orchestra, and those who went indoors to enjoy Marin Symphony’s Sunday matinee were rewarded. The performance was executed with passion and professionalism that speaks to the talented pool of musicians around the Bay Area.

Conductor Alisdair Neale has a knack for engaging superior soloists to join him onstage at the Marin Civic Center, and the young cellist Oliver Herbert is no exception. Currently studying at the Curtis Institute of Music in Philadelphia, Herbert boasts an impressive resume of recent solo engagements and competition prizes. His virtuosity and musical instincts were on full display in Edward Elgar’s Cello Concerto in E Minor.

Begun in the waning days of World War I, Elgar’s Cello Concerto provides a window into the composer’s mindset as he grappled with the heavy emotional toll of unprecedented global suffering. The piece is big and bold, and performers must fight the temptation to over-emphasize any individual phrase with large romantic gestures that could distract from the larger musical arc. Herbert displayed great maturity, always maintaining forward momentum while bringing out the unique character of each movement and its subsections.

Neale also did an impressive job leading the orchestra, eliciting appropriately rich waves of orchestral sound without ever overpowering the soloist. Not that Herbert’s playing could be easily overpowered --- with an expansive tone, rich and full yet strikingly clear (especially in the upper register), his playing was punctuated by crisp articulation and impressive spiccato, particularly in the final Allegro. Judicious and tasteful use of vibrato allowed his incredible instrument (a 1769 Guadagnini) to project in its natural state.

The concert began with an appropriately light performance of Mozart’s familiar overture to The Magic Flute, while concluding with a brisk and engaging rendition of Beethoven’s Symphony No. 3, “Eroica.” It was interesting to juxtapose the three pieces on the program, and I was left with a profound impression of just how influential Beethoven (and in particular the Eroica) was in the journey through time from Mozart’s classical period to the full-fledged Romanticism of Elgar, and the eventual embrace of dissonance in the twentieth century. With this in mind, it would have been nice if some of the very intentional dissonances in the “Eroica” were allowed more space and given more weight, especially the striking fortissimo chords introducing the coda of the first movement.

The tempos were quick overall and at times felt rigid. The fugal section of the second movement built to a powerful climax, with the strings providing a full, weighty texture. The horns stood out in the Scherzo, and the flutes displayed virtuosity in the finale. The sense of rushing occasionally dampened the effect of the more poignant harmonic progressions. The Beethoven generally highlighted the strength of the orchestra, with fine performances from the winds and brass, and a richness of sound from the strings, especially the violins, uncommon among regional orchestras. Marin should feel lucky to be home to an orchestra of such high caliber. This concert, titled Fearless, may not have featured anything that would scare a modern audience, but it proved a great way to conclude Marin Symphony’s 67th season.

The North Bay orchestra demonstrates why it should be on any music-lover’s radar.