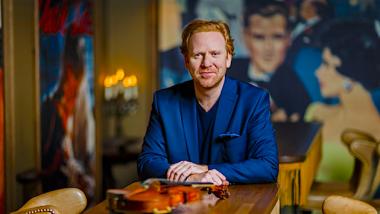 The modern world continuously brings us new conveniences, especially advances in communication, travel and the ability to connect with individuals from all corners of the globe. But for all the good that technology brings, it will never replace the excitement, energy, and social connectivity of attending a live performance. On Saturday night at the gorgeously updated Herbst Theater in San Francisco, without assistance from a single piece of, violinist Daniel Hope and friends took the audience on a journey through the aristocratic world of the European Royal Court, from the 16th through 18th centuries. 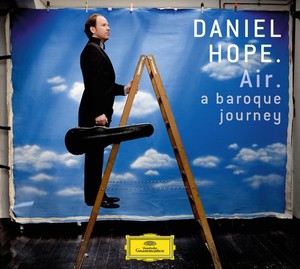 San Francisco Performances presented Hope in “Air: A Baroque Journey,” a program that included much of the material on the violinist’s recording by the same name. The showmanship and artistry of the six musicians onstage was transporting and the engaging banter of Hope’s narrative included tales and anecdotes about the lives of period performers and composers.

The traveling court musicians and composers of this era were the forerunners of our modern, interconnected world. These entertainers were influenced by characteristics from the individuals and societies they encountered as they traveled the European continent (and also the music and religion of slaves they encountered brought from the Caribbean and Africa). As Enlightenment attitudes gradually liberalized the church, composers throughout Europe began incorporating more varied tonalities and rhythms into their compositions.

It seemed fitting for this journey that the cast of six men onstage represented many nationalities (German, Italian, British, Greek, Japanese, American), and their personalities were evidenced with striking individual musicianship. Each one has an international performance pedigree, and they displayed exceptional technical facility along with impeccable intonation — something modern ears have come to expect that is often lacking in Baroque performances, particularly those using period instruments.

The program featured short and varied pieces, clearly showing a lineage to modern pop and jazz in structure and style. The musicians performed mostly from memory, freely embellishing and improvising over the simple melodic structures of dance forms such as the passacaglia, chaconne, and sarabande. In the style of musicians entertaining their aristocratic benefactors, the performers changed places onstage, seemingly always on the move and at times almost dance-like, with evident enthusiasm.

The tone was set immediately as the musicians walked onstage one at a time to the rhythm of Michael Metzler’s drum, with even cellist Nicola Mosca playing while on the move. Highlights included the show-stopping first-half finale, Vivaldi’s Sonata for Two Violins (“La Follia”), showcasing the virtuosity of Hope and companion violinist Simos Papanas. In the second half, Johann Paul Von Westhoff’s La guerra cosi nominata di sua maestà (War, so named by his majesty), easily summoned images for the audience of musical warfare, and there was no shortage of loose bow hairs as evidence of the carnage. Even the familiar and sometimes dirge-like “Greensleeves” — mostly known, as we were reminded, from elevator speakers during the holiday season — was here presented with the spirit of a rollicking peasant dance.

Daniel Hope’s programmatic choices highlighted the rich history of the violin as a mode of musical expression. San Francisco audiences will be able to appreciate his artistry as he takes the reins this season from Nadja Salerno-Sonnenberg, assuming a five-year appointment as music director of the New Century Chamber Orchestra.

The orchestra landed a heavyweight to succeed Nadja Salerno-Sonnenberg.

The orchestra landed a heavyweight to succeed Nadja Salerno-Sonnenberg.