The Film Noir Foundation is well known here in the Bay Area, particularly for NOIR CITY, now the largest film-noir-specific annual film festival in the United States. As a fan of the genre, I was particularly looking forward to Saturday night’s performance of “The Film Noir Project” at the San Francisco Conservatory of Music.

Foundation representative Daryl Sparks was on hand to speak before the evening’s program, talking about her own organization and its work with film noir. The concert itself, presented by Ensemble for These Times in collaboration with the SFCM Technology and Applied Composition department, featured soprano Nanette McGuinness, cellist Anne Lerner-Wright, and pianist Dale Tsang.

Much of the music was newly composed, and two projection screens behind the performers featured primarily still black-and-white photos of a living room appropriate to any film of the era. The rooms included rich built-in wood fixtures and a fully-stocked bar, along with prerequisite luscious house plants. Superimposed on top were various changing images in starkly contrasted color. Some were impressionist artwork, others silhouettes of sharply dressed individuals. The projections were primarily the work of Corinne Whitaker (aka the Digital Giraffe).

There was potential for a unique exploration of the sonic landscapes created in classic noir films by composers for the genre such as Adolphe Deutsch, Miklos Rosza, Max Steiner, Bernard Herrmann, and Henry Mancini, just to get the list started. 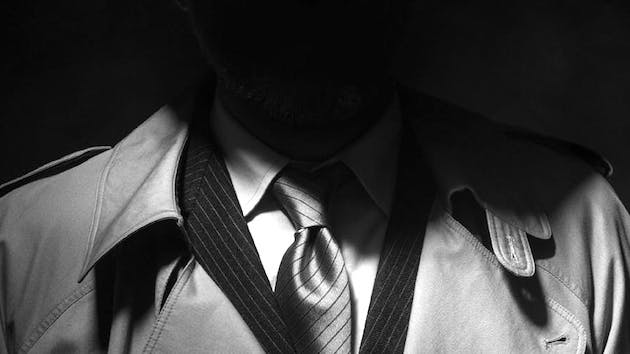 Unfortunately, much of this performance lacked the particular qualities so vital to the noir soundtracks: suspense, seduction, alienation, and a sense of some ambiguous, deeper meaning. There was little underlying energy or tension from the performers, and the visuals did not change frequently enough to become engaging or carry the full weight of the evening.

The compositions themselves felt appropriate in style, often highlighting the vast range of the cello. There were deep and mysterious rumblings from the low register, performed with appropriately harsh staccato attacks or jazzy pizzicato. This contrasted nicely with harmonics and eerie themes in the upper register, and the melancholy mid-range of a soprano voice, in German dialect evocative of the dark songspiel of Weill or Berg. However, because the performance lacked energy and a larger narrative never emerged, the end results fell flat.

The piano was generally used more to paint a broad background on a canvas of sound, which seems more appropriate for the score of a film than as the main musical event. This was especially evident in Indigo Codes, a piano solo that seemed to set a mood, open a door, and then lead to no place in particular.

The highlights of the evening were the two pieces featuring film footage. Before intermission, we were treated to the work of SFCM Composition student Charlie Sehres, who won a competition specifically to write music for clips from classic noir films with the original score edited out. In this case, it was a scene from Roman Polanski’s Chinatown (1974). Sehres’s music fit the mood of the clip perfectly. The suspense of young Jack Nicholson roaming a dirty Los Angeles beach (circa 1937) was matched by the rhythmic intensity of Sehres’s composition, scored for cello, violin, piano, and viola. Unfortunately, we were given a prerecorded version of this score, rather than a live performance to accompany the film.

To close the program, Lerner-Wright and Tsang presented a cello and piano duo titled Waltz Noir, by the young Russian composer Polina Nazaykinskaya. This accompanied Emma Kazaryan’s varying and overlapping film footage, which included a seductive young couple dancing alone in an urban ballet studio; a female artist creating a large portrait using paintbrushes on a floor; a desolate beach scene featuring pages of a script flying away in the wind; and a woman seemingly searching for something terribly important in the alleyways of a city after nightfall.

This was well chosen as the closing number. The combination of stark black-and-white film with a score that ebbed and flowed through multiple climactic moments finally hinted at the importance of musical components in the indescribably mysterious backdrop of any classic film-noir tale.

Correction: The article, as originally published, stated that the concert was presented in collaboration with the Film Noir Foundation, which it was not. The Foundation’s promotional director, Daryl Sparks, did speak before the program about her own organization’s work.

The prolific composer shares stories from his career, from Broadway to Hollywood and back.