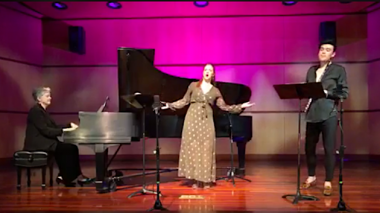 Chamber Music Silicon Valley is one of the organizations facing the question of handling an upcoming concert in the days of the coronavirus outbreak, in this case a cabaret-inspired song recital scheduled for Santa Clara University’s Recital Hall on Saturday, March 7. Some groups and venues in this situation have canceled concerts. Others with less busy schedules are planning to reschedule for yet-unspecified future dates.

The organizers of CMSV did something different. They held the concert as scheduled, but without a public audience, and simultaneously put it out as a webcast on their Facebook page (still available for viewing as of publication time), so everyone could hear it. I was privileged to be there in person with a half-dozen technical and production personnel. It was a captivating show.

The program had been imported from Philadelphia, where a sponsoring organization called Lyric Fest put it on twice the previous weekend with the same performers. Lyric Fest puts on song recitals, specializing in colorful and imaginative programs. This concert featured modern American songs in the cabaret tradition, many accompanied by flute as well as piano. Flutist Ray Furuta, artistic director of CMSV, joined as a guest three Lyric Fest regulars: their artistic director, pianist Laura Ward; their co-founder, mezzo Suzanne DuPlantis; and soprano Maeve Höglund.

DuPlantis and Höglund each sang a few selections from William Bolcom’s large set of Cabaret Songs with texts by Arnold Weinstein, accompanied by Ward on piano. Each also performed a set of songs accompanied by Ward and Furuta together, with the flute in something of an obbligato role. DuPlantis sang Bentley Roses by Jennifer Higdon, a tribute to her flute teacher, Judith Bentley, setting four poems about roses by James Whitcomb Riley (like Bentley an Indiana native). Höglund sang a set of three songs by Karl Hinze, setting poems by Thomas Lux.

Bolcom’s Cabaret Songs vary from easy and outgoing to romantic and nocturnal in a distinctively cool and wry mixture of classical and cabaret/nightclub style. Höglund put on for the witty “Amor” a cheerfully brash self-satisfaction that was amusing without making the song seductive. She gave a similar outgoing style to the light memorial “George” and the sadder “Toothbrush Time.” She brought lively vividness to Hinze’s songs with Lux’s surreal lyrics. The abrupt, snappy, and pop-style “Beauty School” came close to the livelier end of Bolcom’s style. The lyrically gruesome lyrics with the sinister title of “Plague Victims Catapulted over Walls into Besieged City” carried the incongruous musical mood of an art song. In “A Kiss,” Höglund set the tune rolling and burst the dynamics overboard in the climax.

DuPlantis is a more sedate and restrained singer who brings equal care to her interpretations. She gave a flowing quality to her quieter and more nocturnal Bolcom songs, “Blue” and “Waitin,” and was chirpy and simple in “Satisfaction” and the impish “Angels Are the Highest Form of Virtue.” The Higdon cycle is more formal and stately, with musical mood closely keyed to the meaning of the words. DuPlantis was careful to exploit this, turning majestic where Riley is hopeful, low and breathy where he is tender, and with abrupt staccato where he suddenly evokes “the crimson of death.” All four songs had distinct character despite their similar rose imagery.

Furuta’s flute came to the fore in two works he played with Ward alone. Bolcom’s “Graceful Ghost Rag,” originally for piano alone, is the masterwork of his classical-cabaret style. Detaching the melodic line for flute brings out more vividly than on the piano the question of just how staccato or legato this line should be. Furuta took it both ways in different contexts.

He showed tremendous control over his transcription of Jascha Heifetz’s violin arrangement of songs from George Gershwin’s Porgy and Bess. Glides and slides are easier to play on a violin than a flute, yet Furuta played these ornaments with effortless smoothness. The slinky runs on “It Ain’t Necessarily So” were particularly delightful. Furuta and Ward obviously were both having a lot of fun with this.

Silicon Valley Music Festival Breaks out of the Box

Arresting performances featured unconventional ensembles, multicultural influences, and soloists on everything from banjo to Vietnamese zither.