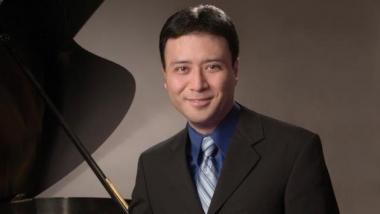 A sterling artist, Jon Nakamatsu opened the Steinway Society season on Sunday night at the McAfee Performing Arts Center in Saratoga. This was the first time I’ve heard a performance at McAfee, and I was quite impressed by this superb recital space. The hall comfortably seats 569 and has excellent acoustics and an unobstructed view of the stage, even from the last row.

A Gold Medal winner at the 1997 Van Cliburn competition, Nakamatsu has local roots and a sizeable following in the area; the hall was full. And Nakamatsu did not limit himself to just playing the piano. After the intermission, he spoke to the audience, reminiscing about his growing up in San Jose and playing at local MTAC events. He also discussed in detail the first piece of the second half, Robert Schumann’s suite Papillons (Butterflies), Op. 2.

There was a preconcert lecture offered by Gary Lemco, but not all listeners attended it, and Nakamatsu’s comments were illuminating. Indeed, the audience then could better appreciate the kaleidoscopic atmosphere of Schumann’s depiction of a masked ball and the suite’s bizarrely droll ending. Even more importantly, talking directly to the audience strengthened an intimate mode of communication between the performer and the listeners.

Franz Liszt, one of the greatest showmen in music, not only announced the pieces he was about to perform in a concert, he conversed with the audience before and after every work on the program. He also mingled with the listeners in the hall, chatted and joked with them (both before and during the concert), making them feel genuinely welcome. That tradition is now largely lost, and I was glad to see that Nakamatsu has made a step in that direction.

When Nakamatsu sat down to the piano after his speech, he delivered Papillons with delicacy and fervor, combining sweeping lyricism with impish whimsy.

Nakamatsu’s approach to the Scherzo was marked by marvelously clean and carefully articulated playing. In his hands, the Scherzo came out fluid and brilliant, exciting and yet light and airy.

After the beguiling finesse and improvisatory mood of the F-sharp major Nocturne, the “Heroic” Polonaise became the dazzling high point of the second half of the program. Nakamatsu’s performance shone with great eloquence and astonishing brilliance. The arduous dash of left-hand octaves in the middle of the piece, effortless and beautifully shaded at first, gradually swelled into an exuberant, thunderous march.

The first half of the concert consisted of two sonatas that could not be less alike. The only thing in common between Mozart’s Sonata in B-flat Major, K. 333, and Brahms’s Third Sonata in F Minor, Op. 5, was Beethoven’s celebrated “Fate” motif (ta-ta-ta-Taa) from the Fifth Symphony. Mozart introduced a precursor of this motif, with all of its sinister implications, in the slow movement of the B-flat Major Sonata, which had been published more than 20 years before Beethoven’s Fifth. Brahms repeatedly quoted the “Fate” motif in several movements of his Sonata.

Nakamatsu’s reading of Mozart’s Sonata was perceptive but somewhat lacking natural flow in a work that cries out for lightness of spirit. I’ve heard far better Mozart interpretations from Nakamatsu, and expected more from him on this occasion as well. The last movement of the Sonata, fortunately, righted the matter. This finale, which includes an unusual (for a sonata) written-out cadenza, sparkles with wit and fine sentiment, and Nakamatsu handled it with a winning flair.

With probing intelligence, Nakamatsu managed to unify this sprawling five-movement opus into an intense, large-scale drama.Brahms’s humongous, 40-minute long Third Sonata has never been my favorite. It is notable for its awe-inspiring compositional complexity — formal, harmonic, polyphonic, and textural — which makes you wonder how it was possible that a young man, who was barely 20 years of age at the time, could possibly have created it. But to me, the Sonata just does not have enough warmth and emotional immediacy; even its most memorable tune at the beginning of the Scherzo is not Brahms’s own; he borrowed it from Mendelssohn’s Piano Trio.

Nakamatsu’s sterling performance, however, has completely changed my perception of the Sonata. With probing intelligence, Nakamatsu managed to unify this sprawling five-movement opus into an intense, large-scale drama. Playing with a rich, burnished tone, Nakamatsu deftly projected inner voices and textures, conjured a wide palette of tone colors, and captivated the audience with an irresistible logic and passionate delivery. Consider me a convert: I am now truly besotted with Brahms’s Third Sonata.