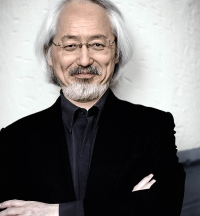 Christmas With J.S. Bach and the PBO

The programming for this set was inventive. Period-instrument ensembles used to promise to take audiences back in time, to perform music the way it was heard “back then.” While groups rarely make such questionable claims anymore, Suzuki did offer a sort of virtual time-travel by placing two works on this program that were heard on Christmas Eve in 1723. BWV 63 was Bach’s earliest Christmas cantata, written during his years in Weimar and dusted off for his first Christmas in Leipzig. It’s an unusual work: no angels or virgins in sight, but David and Satan make appearances next to Baby Jesus in a text by an unknown author. Bach did his best to provide extraordinary music for this dramatic text, providing a symmetrical unfolding of recitatives and arias duets for all four voice types, accompanied by the largest orchestra at his disposal: four trumpets, three oboes, bassoons, timpani, strings, and continuo.

The PBO Chorale and its director, Bruce Lamott, deserve special mention for their deft handling of tightly packed counterpoint.Congregants at St. Thomas’ Church might have left Bach’s morning service reeling from the chromatic music that accompanied Satan’s threats and from the trumpet blasts that chased him back into the darkness in BWV 63. They were treated to even more festive music-making at that evening’s Vespers service, with Bach’s setting of the Magnificat, BWV 243a. Philharmonia Baroque performed the work as it was done in 1723: that is, in E-flat major, rather than D, as Bach later transposed it, and in a slightly longer version than is usually heard, with four movements (two sung in German) interspersed within the usual Latin Magnificat text, which records Mary’s jubilant song in praise of her cousin Elizabeth’s unborn child, John the Baptist. The added “laudes” movements inject specifically Christmas spirit into the old text, and they provide some of Bach’s most delightful music in this setting, particularly the compact, gapped-chorale setting of the carol Vom Himmel hoch.

The PBO ushered its audience into the concert with a feverishly exciting performance of the D-major Orchestral Suite, BWV 1068. This suite contains the ubiquitous Air on the G String, but, more important, gave all those trumpet players another chance to shine. Bach employed three in this festive set of dance pieces. The opportunity to hear works featuring three and four natural trumpets is a rare one, indeed — a nice reminder of how lucky the Bay Area is to have an ensemble like PBO. It was an opportunity to be reminded, too, of just how difficult this music was for the instruments and performers for whom it was written. Bach asked his trumpeters for extraordinary technique, and PBO’s four additions to the normal lineup did so admirably, though the composer’s lofty demands sometimes showed around the seams.

Yet this was really an evening for the singers to shine. Mezzo-soprano Fabiana González and tenor Dann Coakwell both have laser-precise voices, which contrasted with the gentler approaches of the other soloists. Dashon Burton has one of the sweetest and noblest basses I know, and soprano Sherezade Panthaki was the most moving singer of the evening for me, displaying consummate musicianship and a fully invested expressivity. The PBO Chorale and its director, Bruce Lamott, deserve special mention for their deft handling of tightly packed counterpoint, and for ushering in the height of the season with welcome Christmas cheer.