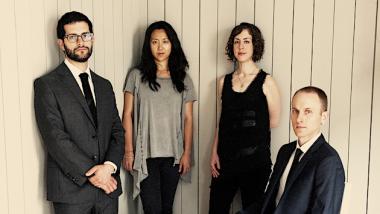 Solo trumpet pieces usually don’t involve a gong. But then, very little is usual about the music of Annea Lockwood (b. 1939), a composer and sound artist whose works walk the line between music and performance art. (Her infamous Piano Transplants invent creative ways to destroy old pianos (see video below), from setting them on fire to letting them sink into a muddy lakebed.) Undaunted by her unorthodoxy, Miller Theatre hosted an evening of her works this past Thursday in their indispensable Composer Portrait series, with the intrepid Yarn/Wire ensemble bringing her music to life along with mezzo-soprano Estelí Gomez and trumpet (and gong) player Nate Wooley.

Although Lockwood is listed as the sole composer on the program, that’s a simplification. As she took pains to note in the post-intermission interview, her process is intensely collaborative: when starting a new commission, she asks the players to bring her “vocabularies of sound” that they want to explore and then works with them to craft the resulting work, often leaving things open to spur-of-the-moment changes. It’s an approach that challenges the strict separation between performer and composer, sometimes with mixed success.

The trumpet and gong made their joint appearance in Becoming Air (2018), which also featured electronics. The work felt disjointed, more a collection of sounds than a unified whole. Some of the sounds were intriguing — I was particularly delighted by a passage where Wooley took off his mouthpiece and stuck a microphone up the bell to capture a volley of gurgles and pops that evoked a robot undergoing a gastrointestinal meltdown — but others were just tedious.

Ear-Walking Woman (1996) was more cohesive. Played by Yarn/Wire’s Laura Barger, Ear-Walking Woman may not feature gong, but it’s hardly a traditional piano showpiece. Barger spent most of the work teasing out sounds from inside the piano, using fingers, pebbles, bowls, and bouncy balls on sticks to render a subaquatic soundscape of clicks, jangles, and forlorn-whalesong moans. Even when she did sit to play a brief passage at the keyboard, the notes were muffled by dimes on the strings, giving the stumbling dance a twangy, off-kilter cast.

Even more straightforward was I Give You Back (1995), a setting of U.S. Poet Laureate Joy Harjo’s poem of the same name for a cappella mezzo-soprano. The text is about overcoming the trauma of genocidal settler colonialism — “I give [my fear] back to the white soldiers / who burned down my home, beheaded my children, / raped and sodomized my brothers and sisters. / I give you back to those who stole the / food from our plates when we were starving.” Watching Gomez perform the music’s stark, declamatory phrases, I couldn’t help but think back to the discussions about settler composers’ relationship to indigenous cultures that swirled around another of Lockwood’s pieces this past summer. It’s an uneasy work about an under-addressed topic.

Strongly connected to the ongoing destruction of indigenous communities and ways of life is, of course, the worsening climate crisis, which served as the inspiration for the last piece on the program, Into the Vanishing Point, a world premiere created with and for Yarn/Wire. The work is organized in four waves, the first three moderate and fleeting, the last protracted and titanic.

In the program notes, Lockwood describes these waves as stages of mourning, but as I listened, they sounded to me like a great awakening instead, starting with hushed chthonic creaks and pops — the gradual seeping of water deep in the bowels of the earth — and ascending through choruses of wooden frogs and desiccated bones to a frenetic climax of whirling light before a long postlude littered with the holy brass detritus from a band of clockwork angels passing high overhead. It was one of the most profoundly spiritual experiences I have had in my concertgoing life. Even at 80, Annea Lockwood is still finding sounds that beguile and enchant.