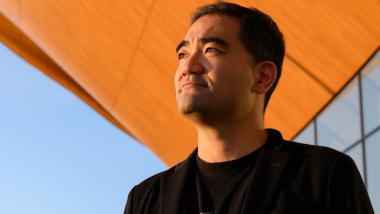 “If musicians play my work well, I think that makes me look good as a composer,” quipped Dai Fujikura during the post-intermission interview of his Composer Portrait concert at Columbia University’s Miller Theatre. Now in its 20th year, the Composer Portraits series offers an invaluable look at some of the most vibrant composers working today, and Fujikura could hardly have asked for better performers than the dynamic, indefatigable International Contemporary Ensemble, who brought his delicate, atmospheric works to life with sensitivity and poise.

Like many composers before him, Fujikura is inspired by the natural world, but for him, that inspiration comes with a twist. In his whimsical program note for secret forest (2008), he complains of allergies and finds birdsong “annoying” and insect chatter “terrible.” The forest of his title, then, is one improved by his own imagination, where buzzing insects become strings bowing out glassy webs of sound, and birds become woodwinds and brass burbling in the background. (Quite literally: The strings were all seated at the center of the stage, the other players dispersed against the sides and back, with the exception of bassoonist Rebekah Heller, who delivered several playfully angular solos from a platform in the middle of the setup.) Daniela Candillari conducted with ease and precision.

The earliest work on the program, abandoned time (2004, revised 2006) for electric guitar and mixed ensemble, struck a better balance between gesture and drive. A tribute of sorts to his teenage obsession with Iron Maiden and Guns N’ Roses, abandoned time makes heavy use of distorted rock-guitar sounds, but the work draws just as heavily from the ascetic abstractions of 20th-century modernism. The result is gleefully off-kilter, somehow simultaneously bracingly sere and delightfully kitsch.

At the other extreme of stylistic unity was Minina (2013), a quintet for flute, oboe, clarinet, bassoon, and hammered dulcimer reduced from a larger concerto-style work. Inspired by the birth of his daughter, Mina, Minina is in two movements. The first is a mysterious, ritualistic soliloquy for alto flute that calls on the other players to play percussion instead of their usual instruments, and the second is a whirling toccata of boundless energy. Like all the works that evening, Minina has a transparent delicacy to it, like watercolor painted on thin glass, but in that musical language it came across as a barn burner.

As a general rule, the musicians of ICE are never less than exemplary, but it should come as no surprise that they played Fujikura’s works with particular life given the long relationship between ensemble and composer: Fujikura was one of the first winners of ICE’s Young Composers Call for Scores in 2003, when the fledgling ensemble was only two years old. Now, 17 years later, the two have worked together on numerous pieces and multiple international tours, and given the friendly vibe on view during Fujikura’s interview with ICE’s Rebekah Heller, it seems likely that this fruitful relationship will continue for many years to come. As long as ICE keeps playing his works, Fujikura will keep looking very good indeed.