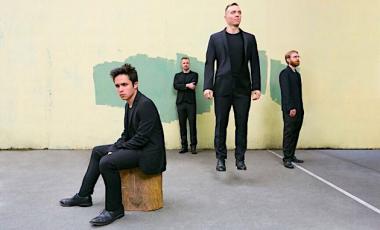 If you turned the proverb “slow and steady wins the race” into an evening of string quartets, you might get something like Wednesday night’s offering from the JACK Quartet. The second of two concerts in the new “JACK Frontiers” series at The New School, the program comprised three slow, static works by living composers that seldom rose above a dull murmur.

This is not to say that it was an evening of beatific lullabies. Christopher Otto’s Ragsma — a last-minute substitution for Lester St. Louis’s Colourway — featured two prerecorded string quartets, one drifting slowly sharp and the other slowly flat while the live quartet fought for some kind of middle ground. The result was a languid journey through unearthly harmonies and forbidden chords, some beguiling, others unsettling. But the lack of any rhythmic or melodic variation robbed the piece of any forward motion and the work’s one trick of opening up a new harmonic vista every few bars grew dully predictable: the final third of the piece felt like it was mechanically filling time while waiting for the recorded string quartets to stop sliding around so the opening consonance could be re-achieved.

A few of Ragsma’s denser passages edged solidly into mezzo-forte territory, making it easily the loudest piece on the program; Clara Iannotta’s dead wasps in the jam-jar (iii) was the softest. Adding subtle electronics to the string quartet, the work is a hushed exploration of subtle timbres — faint scratches, breathy sighs, and whispery high tones. Listening to it, I thought not of hymenopteran corpses ruining afternoon tea but of a small ice cave in the arctic depths, passing squalls overhead and hunting sea beasts underneath, muffled by meters and meters of frozen water.

Tyshawn Sorey’s Everything Changes, Nothing Changes closed out the evening with a protracted tapestry of quiet, dissonant chords. The program note explains that the work is inspired by sudoku puzzles, accurately adding that the musical structure “will likely be imperceptible to the listener,” but the pervading mood is one of quiet dread, a constant anticipation of a disaster that never arrives. In light of the work’s title and mood, I found myself mulling the intractability of this country’s injustices. Technology may have transformed U.S. society in countless ways in the past 100 years, but police still kill black people at around the same rate as Jim Crow lynchings, centuries-old xenophobia still fills our government, we’re still running concentration camps on stolen land, and on and on and on. The country changes; the hatreds stay the same.

The JACK Quartet are consummate performers. It’s hard to think of another string quartet that plays such ferociously contemporary repertoire with their impeccable precision. But curatorially, this concert was a misstep. While each of the featured composers has a distinctive voice, programming three static, subdued works did not allow those voices to shine as they could have, and instead turned meditations into slogs. It’s possible that St Louis’s work would have provided more in the way of enlivening contrast; given the technical challenges of the JACK Quartet’s usual repertoire, I would be surprised if they didn’t have a huge number of performance-ready choices when deciding what to replace Colourway with, but I have to believe they could have chosen something that wasn’t just more of the same. Let’s hope next year’s Frontiers series is a more balanced affair.

The lights were more than dimmed at S.F. Performances’ inaugural PIVOT program at the Strand Theater. They were turned off, and they stayed off for the concert’s duration.

The musicians flawlessly played the composer’s complete string quartets — though sometimes the performance was more procedural than passionate.