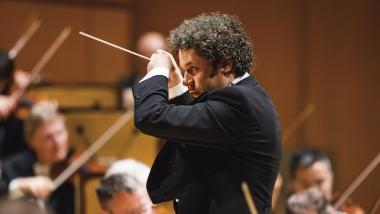 On Feb. 4, 2012, at the climax of his audacious Mahler Project, Gustavo Dudamel crammed 1,017 performers into the Shrine Auditorium — a big old barn of a hall — to perform Mahler’s colossal Symphony No. 8. The performance had a tremendous emotional impact; Mahler’s ecstatic vision seemed to cut through the crummy, muffled acoustics and hover over the place. Two weeks later, Dudamel achieved similar results in the Eighth with 1,400 performers in Caracas, as captured on a DVD.

The LA Phil didn’t use Walt Disney Concert Hall for such a lollapalooza then because it was obvious that this 2,265-seat room couldn’t accommodate the vast forces needed for a genuine re-creation of the 1910 premiere of the so-called “Symphony of a Thousand.” Yet when it came time for the grand finale of the Phil’s centennial season Thursday night (May 30), they put Mahler’s Eighth in Disney Hall after all — albeit this time with an ensemble about a third of the size of the one in the Shrine. You could call it the chamber ensemble version of the Eighth, but don’t take that literally.

You would hope that using just the LA Phil and four choirs instead of a football-stadium-sized amalgam of two orchestras and 16 choirs, a real pipe organ instead of an imported electronic one, and the far superior acoustics of Disney Hall would result in a tighter, more audibly detailed performance — and it did. There were thrills and chills to be had in spots, especially when the Los Angeles Master Chorale and the Pacific Chorale were all but shouting the words over the orchestra and when Dudamel dramatically whirled around to summon the offstage brasses in the balcony at the end of each movement. And it was loud — at times, very loud, almost overloading the room at near-rock-concert decibel levels.

Dudamel’s approach hasn’t changed much in structure since 2012; he still applies the brakes in the same way in certain passages before shooting ahead with sudden bursts of speed. The difference is that the fast passages are faster than ever now, often to the point of frenzy. His Eighth now comes in at 74 minutes, knocking four minutes off the Shrine performance and six minutes off the Caracas one — a big difference that you could feel without the proof of a stopwatch.

There are, however, ways in which an excellent Eighth could have been turned into an overwhelming Eighth. One of the towering moments in Western classical music is a stretch just before the massive recapitulation of “Veni, creator spiritus” in Part I where some conductors — Leonard Bernstein, Simon Rattle, and Kent Nagano among them — have imposed a slowdown as they reach the summit, heightening the apocalyptic effect to a shattering degree. Yet Gustavo continues to observe Mahler’s tacit desire to keep it moving — which is technically correct, but it would have come off more powerfully had he slowed down.

Beyond the scope of this performance, though, is the idea that Mahler knew something about psychoacoustics. When he gave the premiere with a thousand performers, Mahler seemed to sense instinctively that these numbers would produce a titanic physical/sensual impression with this particular score. I am sure that is why the Shrine performance, despite the discouraging conditions, created a more emotional catharsis than the one at Disney Hall, as fine as the latter was.

Ahead of an international tour, the LA Phil stretches its Mahler muscles.

The eccentric and enormous work was lucid in the orchestra’s hands.

Mahler on the Big Screen With the LA Phil