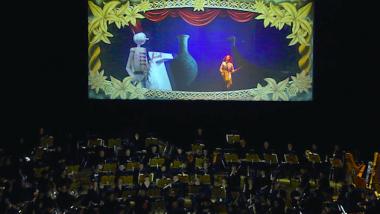 Mahler on the Big Screen With the LA Phil

There’s no way to know what Gustav Mahler would have thought of the Los Angeles Philharmonic’s experimental transformation of his symphonic song cycle, Das Lied von der Erde (The Song of the Earth), into a high-tech, semioperatic, psychedelic visual experience. But the effect of Saturday’s performance at the Walt Disney Concert Hall, conducted by Gustavo Dudamel, with visual magic provided by the Chilean arts collective, Teatrocinema, was engrossing.

At the root of the experience was the sensuality of Dudamel’s interpretation, the superbly crafted musicianship of the orchestra and the excellent vocal styling of the two soloists: tenor Russell Thomas and mezzo-soprano Tamara Mumford. The digital stagecraft that made it possible to insert the two singers into a swirling visual cosmology was dazzling. The ethereal realm of the song cycle was transformed into a visualization with its own, often quirky, vocabulary.

Co-directed by the Philharmonic’s Yuval Sharon and Teatrocinema’s Juan Carlos Zagal, this visual scheme (designed over 13 months to accompany the six poems, translated from Chinese into German by Hans Bethge, that make up the text) creates a netherworld that alternates between the dream surrealism of Salvadore Dali, the innocent flower power of Yellow Submarine, and the multidimensional time traveling of 2001: A Space Odyssey.

Placed on an “invisible” platform above and behind the orchestra and within a motion picture frame, the two singers and three silent actors perform with scrims in front and behind them. Through a combination of front and rear projection, combined with synchronized computerized graphics and coordinated choreography, the staging creates the sense of a multidimensional world where time, space, and gravity become totally fluid.

Each of the poems is given its own visual interpretation. The powerful opening movement “The Drinking Song of Earthly Woe” took on an Alice in Wonderland “Drink me” quality. As Thomas declaimed in his heroically scaled tenor voice, “Schon winkt der Wein im gold’nen Pokale” (The wine beckons in golden goblets) an enormous wine glass appeared, tipped its contents, then appeared to shrink to the point that it could be quickly substituted for a real glass that the tenor sipped from. It was a literal visualization of the text with a Dali-esque twist.

In the second poem, “Der Einsame im Herbst” (The solitary one in autumn) the autumn fog crept “bluishly over the lake” sensually described by Mumford in a voice as smooth as velvet.

When the third poem, “Von der Jugend” (Youth) referred to “a pavilion of green and white porcelain” a green and white Chinese vase appeared that then absorbed the tenor into its world of Chinese bridges and perspective-altering reflections.

At their best the visuals were an inventive addition that did not draw too much attention away from the beauty and power of the songs or the detailed rendition by Dudamel, who was conducting the work for the first time. Then it went wrong.

The final song in the cycle, “Der Abschied” (Farewell), which is as long as all the other songs put together, represents Mahler’s most profound farewell to life:

(The sun departs behind the mountains. In all the valleys the evening descends with its shadows, which are full of coolness).

Unfortunately, during this most moving of passages accentuated by rhythmic hockets from the two harps and a mournful “Tristan-like” melody in the winds, the visual scheme lost its way when a floating piano made its entrance like the Imperial Cruiser in Star Wars.

A truly bold artistic decision would have been to forgo the visuals at this point and allow the music and lyrics to stand alone, or at least with a minimal amount of visual accompaniment. I made the choice to close my eyes. However, when the final moment came and Mumford sang the refrain, Ewig ... ewig... (Forever ... forever) the staging created a moment of pure transcendence as the singer, with her arms extended in a phantom embrace, slowly dissolved into a blue cosmos.

Throughout his life, Mahler conducted hundreds of operas, but doggedly avoided stepping into that arena as a composer. But, as Yuval Sharon pointed out in his insightful preconcert talk, there is distinctly an operatic quality to Das Lied von der Erde. Expanding on this idea, Sharon said he saw the two singers as a couple going through the seasons of a relationship. The result, though uneven, was fascinating and a bold experiment in enhanced performance.

A Strangely Wonderful Trip to the Moon From Disney Hall

The L.A. Philharmonic's production of Andrew Norman's opera for children is a joy.