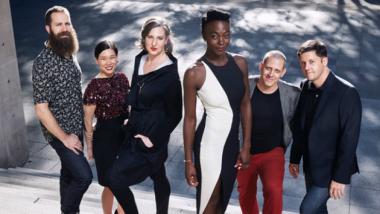 Almost everything about Eighth Blackbird’s concert Saturday was odd. The setting was an ornate former movie palace. The rambunctious young crowd was what you might expect to see at a rock concert at Coachella. And the program (with one exception) could have been called Eighth Blackbird Lite.

Presented by UCLA’s Center for the Art of Performance, the concert at the Theatre at Ace Hotel — in the miasmic interior of the former UA Alhambra Theatre, designed in the 1920s as an over-the-top Moorish folly. Beautifully restored (and renamed), it’s part of the real estate development frenzy that is transforming downtown Los Angeles. According to CAP’s Artistic Director Kristy Edmunds, the idea is to target the artist community of downtown and nearby Silver Lake. It appears to be working.

Judging by the boisterous, whooping reception, much of the audience was there for singer-songwriter Will “Bonnie Prince Billy” Oldham, but seemed to be well familiar with Eighth Blackbird, the six-member ensemble consisting of Nathalie Joachim (flute), Michael Maccaferri (clarinet), Nick Photinos (cello), Yvonne Lam (violin), Matthew Duval (percussion) and Lisa Kaplan (piano). They were also probably familiar with rock guitarist/composer Bryce Dessner (of the band, The National) whose set of Murder Ballades dominated the first half of the concert.

Dessner’s song collection (composed in 2013 and expanded in 2015), which sounds like a postminimalist Aaron Copland established the American roots music crossover theme that dominated the concert. Murder Ballades draws melodic inspiration from classic American folk ballads and fiddle tunes, and uses the titles of the source material for his interpretations: “Omie Wise,” “Young Emily,” “Wave the Sea,” “Brushy Fork,” “Pretty Polly,” “Tears for Sister Polly,” and “Down in the Willow Garden.” The work’s other movements, entirely by Dessner, maintain the atmosphere of Americana with the instrumentation mimicking the rhythmic frailing of a banjo, a flatpicked guitar, and the romantic lilt of a mandolin. Dessner, like Copland, has a real flair for instrumental color.

Despite its title, Dessner’s music is gently lyrical, like Copland’s Americana style. The only exception was a cello solo by Nick Photinos that did take on a knife-thrust intensity. For the final ballad Will Oldham came on stage and sang with Nathalie Joachim. The plaintive harmonies and lyrics added a great deal. After all, these ballads were meant to be sung.

David Lang’s “learn to fly” (the third movement of These Broken Wings) opened the concert and set the tone. Composed for Eighth Blackbird in 2008, it’s a rollicking piece in which an initial rhythmic pulse, established by the piano, is then volleyed about the ensemble: piccolo against clarinet, cello and violin against the thud of a bass drum. The mood is light, the momentum dance-like, especially when the piece shifts gears and turns jazzy with the vibraphone and piano in a spirited conversation. The group performed it with precision.

It’s very unusual to hear a relatively obscure piece of modern music performed on two different programs the same week by two entirely different organizations. But Frederic Rzewski’s 1971 Coming Together, which had been performed four days before by L.A. Philharmonic, appeared on this concert as well. The two interpretations could not have been more different.

Gustavo Dudamel approached the work with exact precision, expanding it to symphonic proportions. The narration by Davóne Tines was stentorian as he recited the words of Samuel Melville’s pre-Attica prison riot letter with a sense of poetry and gravitas.

The performance by Eighth Blackbird was deliberately chaotic, with Oldham’s razor-sharp, often cracking voice declaiming the text in an ever-mounting crescendo of intensity. By the end he was practically screaming with members of the ensemble offering responses like the feverish crowd at a demonstration. I wouldn’t (nor would, I guess, Rzewski) say one was right and one was wrong. It was a fascinating study in contrasting takes.

I do not understand the appeal of Oldham. His three country/pop-flavored songs that concluded the evening seemed to me like third-rate John Denver — Hallmark card lyrics swathed in cotton candy orchestrations by Lisa Kaplan. Oldham sings in a voice that is brittle and unappealing without a hint of “Bonny” stage presence. But 23 well-received albums over 25 years tell their own story. He’s a seasoned performer, just not one I could connect with.

Virtuosic playing takes center stage on eighth blackbird’s latest CD, sometimes at the expense of the music’s power and beauty.