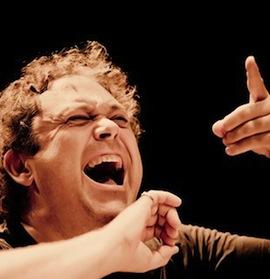 English Delights From the PBO

Guest conductor Richard Egarr introduced Philharmonia Baroque Orchestra’s first concerts of the new year by inviting the audience to join him at an “English Feast.” Epicureans in the audience may have shuddered at the idea, but Baroque music fans surely knew exactly what he meant. Some standard fare — roast beef and potatoes, really — was balanced with spicier (and rarely sampled) side dishes. I was in the warmly receptive audience at Berkeley’s First Congregational Church on Saturday night, and we relished almost every bite of the feast.

The first course came served warm. That greatest of all “English” composers, Handel, welcomed us with his symphony from Saul. This piece from Handel’s fourth English oratorio was the perfect choice to open a set featuring a world-class orchestra and a guest conductor who also happens to be one of early music’s most technically gifted harpsichordists. Handel cleverly inserted a miniature concerto movement in this work, which he used to wow audiences with his abilities on the organ. Egarr took the part on the harpsichord, a German model instrument by John Phillips that is becoming one of the most frequently heard instruments on Philharmonia’s stages. (And it sounds better every time I hear it.) Egarr played with the expected deftness, and then made way for a little technical display from oboist Marc Schachman, whose playing of rapid, Italianate passagework was stunning.

Indeed, Egarr obviously loves oboes (as well as PBO’s brilliant players) and gave them every chance to shine in this program. After the heavy main courses of the middle part of the program, he treated us to whipped cream and cherries with Handel’s Concerto Grosso Op. 3, No. 5, and the ever-popular “Arrival of the Queen of Sheba” from Solomon. Both these works prominently featured oboists Schachman and Gonzalo Ruiz, who earned thunderous applause.

The central part of the program was a mixed plate of English delights, with pieces ranging from the early-17th to mid-18th centuries. The earlier works sounded a bit shaky at times. Matthew Locke’s fascinating incidental music from The Tempest was marred by somewhat timid playing, especially at the beginning, when Egarr’s constant warning gestures indicated that he wanted a tiny, whispery sound from the band that, for whatever reason, just wasn’t forthcoming.

... incredible music, among the greatest written on the British Isles (or anywhere).

Still, the performance of this work had brilliant moments, including an innovative approach to presenting dense, canonic writing. Egarr casually (and clearly) explained to the audience just what a “canon 4 in 2” is: a piece of strict imitation in four parts, with two themes used as compositional material. Then he demonstrated, having the first canonic theme played alone in two parts, followed by the second, before allowing the audience to enjoy the full, dizzying array of contrapuntal lines that Locke provided. Suddenly, all that dense counterpoint could be followed by the ear and the mind. The approach was didactic, though admirably effective.

That level of clarity was somewhat missing from the group’s performance of William Lawes’ consort music for six parts. This is incredible music, among the greatest written on the British Isles. (Or anywhere — Egarr even compared the pieces to Beethoven’s late string quartets.) But though Egarr claimed that the dense counterpoint works “jolly well” on violin-family strings, I missed the clarity and transparency of the gamba consort for which the piece was intended.

At Home Under New Hands

The musicians of PBO generally respond well to guest conductors, and it was evident, from the very first notes that the ensemble played, that they enjoyed working with Egarr. This was little surprise, as he is a charismatic, energetic, and musically sensitive performer, who clearly brought a huge helping of enthusiasm to the table. The audience gobbled up every morsel he delivered, including chatty spoken program notes and some charming eccentricities, such as a little plastic dinosaur affixed to the treble end of the harpsichord’s jackrail. (It looked like an apatosaurus, though I’m hardly an expert.)

At the root of Egarr’s appeal was his consummate musicianship.

Egarr’s appeal extended far beyond these ancillary features. At the root of it was his consummate musicianship. His conducting style was effective and aurally satisfying. He led from the keyboard with his left hand, leaving his right hand to play audible continuo realizations. And when he turned from continuo-leader into soloist for a performance of Thomas Augustine Arne’s Concerto in G Minor, the results were superb. This concerto was the evening’s yummiest dish, to my palate. Not only was it performed with flawless technical execution and satisfying musicianship, it was a bittersweet reminder that, had more of Arne’s music survived (little of it does), his reputation would surely be more widespread than it is today.

This was a special program — a rare opportunity to sample a couple hours’ worth of English instrumental music and to be reminded that England was never, ever the “Land ohne Musik.” Indeed, throughout the turbulent 17th and 18th centuries England was home to more varied music than anywhere else in Europe. Perhaps it is this placelessness that can make its output seem at times impenetrable. Yet it simply takes the proper hands to bring this dazzling array of styles to life, and for that Egarr and the PBO deserve the most unabashed praise.