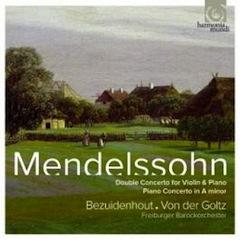 Felix Mendelssohn was once praised, by no less eminent a critic than Robert Schumann, for his ability to “reconcile the contradictions” of his age. It isn’t difficult to interpret Schumann’s remark when considering Mendelssohn’s music, especially his concertos. Mozartean clarity stands comfortably alongside Beethovenian grandeur, the formal creativity of C.P.E. Bach beside the lyrical beauty of Schubert.

Similar praise might be showered on Harmonia Mundi’s latest recording of two of Mendelssohn’s concertos: the Piano Concerto in A Minor and the Double Concerto for Piano and Violin in D Minor, both youthful essays in the genre. The soloists (Kristian Bezuidenhout on fortepiano and Gottfried von der Goltz, who not only plays the violin part but also leads the Freiburg Baroque Orchestra on this recording) give a superb performance, plunging headlong into the music with the same youthful exuberance that inhabits these works.

Like their chosen composer, these performers manage to bridge old and new in a captivating way. The idea of playing 19th-century music on period instruments is no longer a novelty; recordings have proliferated, and “Baroque” orchestras regularly perform later music. But this disc still manages to produce Mendelssohn as you’ve never heard him before.

The pieces themselves contribute to the newness of the experience, since they are hardly the composer’s greatest hits. The A-minor piano concerto was written in 1822, when Mendelssohn was just 13, and his remarkable sister, Fanny, premiered it at one of the family’s house concerts. Although the composer had not yet achieved the maturity exhibited by works like the Midsummer Night’s Dream overture or his famous Octet for Strings (produced about three years later), these concertos show both Mendelssohn’s firm mastery of current musical styles and his own unique voice. The first movement is clearly indebted to other composers, most notably Hummel and Mozart, in its conception. The other movements, however, reveal a blend of newness and formal modeling; the second movement contains some recitative-like writing, not dissimilar to C.P.E. Bach’s music for keyboard, but quite rare in later 19th-century works. The third movement that follows is pure Mendelssohn, with stride leaps in the soloist’s left hand and spirited, close-knit passagework in the right.

The Double Concerto is an even rarer beauty. Like the A-minor piano concerto, it remained unpublished in Mendelssohn’s lifetime. It wasn’t until 1999 that a critical modern edition was available. Mendelssohn first composed the work to be performed with his best friend, Eduard Rietz, in another private concert. On July 3, 1822, Mendelssohn revised the work’s scoring, adding timpani and winds. Astoundingly, the premiere of that version of the work appears to have taken place on the same day. It is that enlarged version of the piece that’s on this disc.

Bezuidenhout shines in this performance. In the solo concerto, he executes the technically demanding figuration of the last movement with a precision that is clearly not a mere product of the record’s editor. Bezuidenhout also improvises along with the orchestra, continuo-style, during the portions where there are no solo lines. This is a rarity on Mendelssohn recordings, and has a significant impact on the orchestral sound.

The fortepiano used also provides Bezuidenhout with expressive possibilities, which he employs to full effect. It’s a copy of a piano by Conrad Graf, whose pianos Mendelssohn played. The sounds produced by this instrument will be, for some listeners, an opportunity to hear Mendelssohn’s music with fresh ears. For instance, the soloist luxuriates in the placid second movement; the strings use their mutes here, which allows Bezuidenhout to employ the fortepiano’s sordino (a device that puts a layer of felt between the strings and the hammers) in the opening section and elsewhere. The timbral effect is mesmerizing, and impossible to reproduce on a modern piano.

Gottfried von der Goltz also delivers a spirited performance, both as conductor and soloist. In the double concerto, many of the solo sections are like miniature romantic violin sonatas, in which the orchestra falls completely away. The soloists are thus left the freedom to enjoy one another’s musicianship, as in more intimate genres. Von der Goltz embraces the rhythmic and dynamic flexibility that Mendelssohn’s design allows him, and the soloists indulge in impassioned rubato and improvisatory approaches that are thrillingly fresh.

The disc is sumptuously produced. Its liner notes include two equally informative and eloquent essays, and the use of artwork by Caspar David Friedrich is an attractive, if predictable, choice. The sound is beautiful and faithful to the instruments throughout. The Graf piano is particularly well-recorded, and its slightly out-of-tune treble trichords only add to the uniqueness of this recording. Without a doubt, this is one of the most special classical recordings of 2011.