No one, not even Dave Brubeck, expected Time Out to be the first million-selling jazz album. It was supposed to be an experimental voyage into strange regions, a record that fiddled with compound and odd-meter time signatures that were supposedly alien to jazz. No American Songbook standards, all originals, and no one thought Americans could dance to it. 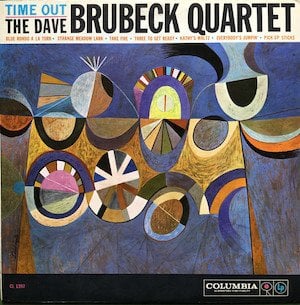 It took a while to catch on. Recorded in the summer of 1959 and released later that year, Time Out didn’t enter the charts until November 1960 and didn’t rise to an astounding No. 2 until a single of “Take Five” was released in 1961. It was subjected to withering reviews in purist quarters, including a spectacularly misguided two-star (out of five) writeup in Down Beat. “Vulcan at the forge,” sneered the reviewer, who went on to claim that Brubeck “has been palmed off as a serious jazzman for too long.”

Hearing Time Out today, it’s tempting to wonder what all the controversy was about, for the album seems to roll out of the loudspeakers with a fresh, joyous burst of melody and swing, no matter how complex the meters or pungently polytonal the harmonies. It sounds so spontaneous, so easy.

But now we know that it wasn’t all that simple, because a set of unreleased takes, Time Outtakes, has just been put out as the first release on the new Brubeck Editions label. Before this, the only alternate take to leak out of Columbia Records was the “Take Five” single (compare Paul Desmond’s alto sax solos on the single and the album; they’re quite different!). All were recorded on June 25, 1959, the first day of sessions for the project. 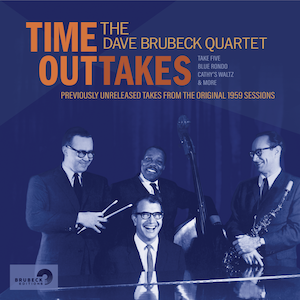 Brubeck has said that he and his quartet — the famous one with himself, Desmond, Eugene “The Senator” Wright on bass and Joe Morello on drums — came into the studio with the album “all rehearsed and ready to go.” But some of what we hear shows that the struggle to get this material completely under control was still going on.

The outtake of the most famous tune the Dave Brubeck Quartet ever played, “Take Five,” is astonishingly unsettled. The great Morello — as technically gifted as any drummer who ever lived, the owner of a light, dancing sound with lightning wrists serving a deceptively laconic persona — taps on the bell of his ride cymbal to get it started at a fast pace, yet his subsequent rumblings on the tom-toms and rim shots sound out of kilter. Desmond, the composer of the tune, seems not at all comfortable in his solo, and Brubeck just offers chords along to the rhythm briefly before giving up. Morello finally finds the key in his big drum solo, taking off on the toms and snare drum directly into the 5/4 groove, a tour de force before the strange gait that began the take returns.

More signs of laboring to get “Take Five” right can be heard on the fascinating, if brief, collage of session chatter that concludes the album. Remember, hardly anyone in jazz at the time was playing music in anything other than good old ordinary 4/4, the occasional 3/4 jazz waltz notwithstanding. “No, that’s not it … I’ll get it,” Joe says as he struggles to establish the groove. Always the blithest, most cheerful spirit of the session, Dave tries to reassure everyone, “This is all rehearsal!” “You’re goddamned right it is!” somebody quips out loud (probably Paul). “And I’m not getting paid for it!” Everything would fall into place at the next session a week later when the definitive “Take Five” tracks would be cut, but you realize it was no miracle; just a lot of hard work and focus from some inspired yet all-too human jazzmen.

While the other outtakes from Time Out are closer to the polished official takes, those who know the finished album will find plenty of new things to savor. “Blue Rondo à la Turk” is more than two minutes longer than the official version. Desmond gets a grip on the lyrical “Strange Meadowlark” immediately, even working in a quote of “Bewitched, Bothered, and Bewildered,” which — knowing Paul — may have been one of his sardonic commentaries on the musical puzzles that Dave was laying on him.

The outtake of “Cathy’s Waltz” — the name of Brubeck’s daughter spelled correctly at last! — is the best unearthed track of the bunch, with a more pronounced jazz waltz feeling from Morello on the brushes under Desmond, and Brubeck doesn’t try as hard to play in four against Morello’s steady groove in three. “Three to Get Ready” is a little slower, more loaded with Brubeck’s signature polytonal power chords, ready to go. In lieu of “Everybody’s Jumpin’” and “Pick Up Sticks” — which were recorded in one take, hence no outtakes — the album includes a longtime standard in the Quartet’s touring repertory, “I’m in a Dancing Mood,” and “Watusi Jam,” a variant of “Watusi Drums” whose repeating bass line became the underpinning of “Pick Up Sticks” later that summer.

I would like to have had more fly-on-the-wall session chatter that would give us an even more illuminating view of how these once-fearsome experiments evolved into a classic record. But it’s great that this much is now available to all — and the sound quality, even from a stream, is excellent.

After more than six decades of generously sharing his unique performing and compositional talent, and a bright and ingenuous spirit, Dave Brubeck passed away on Dec. 5, a day shy of his 92nd birthday.

An Audio Souvenir From Keith Jarrett’s Jaunt to Budapest

Is the pianist’s latest recording the end of an era?