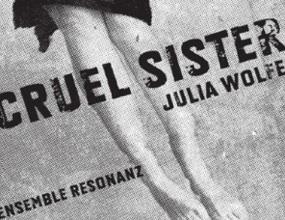 There are very few composers that I like indiscriminately. It’s rare that a composer doesn’t have a dud, a piece that is awful. Beethoven has his Wellington Victory Symphony, Stravinsky has so many different styles, it’s likely at least one of them doesn’t appeal to you, and Debussy, well, never mind. Debussy was perfect.

I first began paying attention to Julia Wolfe when I was 10 years old. I heard her piece Believing and was immediately hooked. From the groove based opening inspired by The Beatles, to the singing cellist and the falsetto ensemble that follows, to the gradual build of beauty, tension, and energy, to the final explosion. It stunned me into a state of disbelief. Since that piece, I have followed Julia Wolfe’s music passionately. I remember hearing Dark Full Ride, her drum kit quartet, live twice, and I remember when the CD came out, with her intensely thick sounding Bass Nonet Stronghold, which resonates every register of the bass, every dynamic possibility, and every engaging, thick texture possible.

All this is to say that Julia Wolfe is one of the most consistently engaging composers writing music today. Every piece impresses, so it came as no surprise to me that her latest CD, Cruel Sister, was just as amazing. The CD has two different pieces on it: Fuel and Cruel Sister, both written for string orchestra, and is performed by the articulate and clear Ensemble Resonanz, conducted by the superb Brad Lubman.

Fuel was originally written in collaboration with filmmaker Bill Morrison, and is about how we use, transport, and value fuel. The composer on the piece: “Fuel takes its inspiration from many sources — both sound and visual: the whir of incessant mechanisms, the loading and unloading of ships, the sway and creaking of docks, transportation by truck and train, the sweat of human energy, and the power source of the sun.”

The piece is frenetic and high energy, but blows through Julia Wolfe’s sound-mass harmonies in a propelling manner. The piece is shaped over 5 relatively short movements that flow together smoothly, but listen to it and it is easy to imagine the hard, excellent work that the musicians are putting into it.

Cruel Sister takes as its subject matter, an old English folk ballad. This song (check out a great version here on YouTube) is the story of two sisters who both fall in love with a young man. One of the sisters, the “cruel” one, pushes the other one into the sea to remove the competition. some minstrels find her body washed up on shore and fashion it into a harp. They are then asked to play at a wedding, in fact, the wedding of the young man and the cruel sister. The cruel sister hears the melody played on the bones of her deceased sister, wishing for her to have loved more purely, and it is sung “and surely now her tears will flow.” (It is worth noting that Nico Muhly’s The Only Tune is based on a folksong with a similar —or possibly identical — story, but they are not the same tune.)

Julia Wolfe was drawn to the powerful and pervasive negative emotions in this story, like greed and jealousy. She wrote her Cruel Sister to try to understand this, and feels that her piece is a plea for a higher form of love. The piece certainly deals with powerful gestures and tortured harmonies that wrought dark emotions from the listener. Each of the four sections grip you with intensity, and while much of the music calls for sustained intense repeated notes, it is never dull. Also worth mentioning is the haunting and beautiful melody that creeps into existence in the fourth section. Perhaps this melody truly does represent the harp song, hoping that we all will hold ourselves to a higher standard of life and love.

As usual, though, Julia does not end with that beauty. Instead she incorporates a thickly textured, highly dissonant, almost brittle sounding chord that begins to grow into a cloud that hovers and grows over the rest of the work.