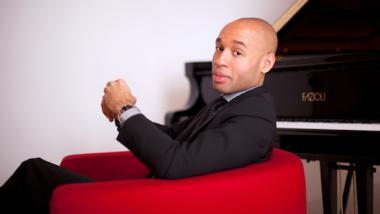 Usually a cough is the opposite of revelatory; from a neighbor in the audience it’s an annoyance and from a performer in the middle of a piece it’s a problem. But last night at Stanford’s Bing Concert Hall, Cécile McLorin Salvant’s completely mundane cough crystalized just how she and the ensemble behind her achieved the beauty of the evening.

She was singing Gershwin’s “My Man’s Gone Now” with the Aaron Diehl ensemble. The group had already finished their set of 15 pieces by Ferdinand “Jelly Roll” Morton and George Gershwin and had come back onstage to give an encore. Salvant finished an impeccable, dramatic melodic ascent, ended the phrase, and turned towards the piano with a brief cough. She very naturally picked up a bottle of water to remedy the situation while the rest of the group played on.

No one in the audience flinched or was on edge about the trajectory of the piece. What could have been the most sadly memorable moment of the evening slipped right on by. The performers were not only in complete control, they were completely comfortable, at home on the stage. It was as though the musicians had brought their friendly house concert to us.

This is not to say that there was a dearth of virtuosity. Aaron Diehl emblazoned his virtuosity into our memories with a performance of Morton’s “Finger Breaker.” Together with sideman Adam Birnbaum, the duo performed arrangements of Gershwin’s Preludes that outshone all the dueling piano situations I’ve encountered. The groups’ final piece, an arrangement of Gershwin’s “I Got Rhythm,” featured stunning solos from each performer: Paul Sikivie’s bass solo drew shouts of pleasure from the audience, Lawrence Leathers’ drum solo deftly incorporated the rising four pitches of the song’s opening, Corey Wilcox gave a trombone solo so intense that it forced him off his seat, Brandon Lee made his trumpet soar effortlessly, and Evan Christopher’s clarinet practically caught on fire from the kinetic energy transfer.

But the ensemble playing and performer interactions even more moving than the virtuosity. In their piano duet towards the end of “I Got Rhythm,” Diehl and Birnbaum communicated so completely that notes aligned with laser-like precision. The body language over the course of the evening also bespoke the camaraderie: Diehl turned on his piano bench and crossed his legs while taking in Sikivie’s wowing solo. Sikivie, when not playing, chose not to leave the stage but to sit on the rug at the feet of the performers and enjoy his fellow musicians. And when Wilcox, Christopher, and Lee entered the stage at the end of the second piece, they were playing along, but giving more the air of visiting friends than a theatrical procession.

Amid Diehl’s ego-free leadership and the ensemble’s fraternity, Salvant’s vocal performances were highlights. Every song she sang, often one from off the beaten track with fascinating lyrics, was delivered like a monologue. Her voice moved agilely between almost-speaking and the lushest sounds. Her microphone use was perfection, sometimes resonating her mellow tones, sometimes creating ethereal, whispery hushes. When Salvant sings quietly, that is where the magic is. Rows away from her, she made me feel like I was in her circle of friends. Even her hand gestures were effortless; the whole performance felt natural — cough and all.