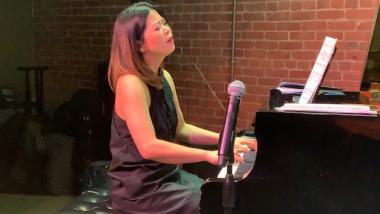 Motoko Honda doesn’t really consider herself a jazz musician, but the pianist seems to thrive in their company. A composer of mercurial moods and expansive melodic resources, she draws on various combinations of European classical sources, new music, and jazz devices depending on the setting. Last Wednesday at the California Jazz Conservatory’s Rendon Hall, she played two consistently captivating sets with her Simple Excesses Quartet, creating music that was neither simple nor notably excessive.

Since moving to the Bay Area about six years ago from Los Angeles, the Japanese-born pianist has slowly forged creative alliances with some of the region’s most interesting musicians. Featuring bassist Miles Wick, drummer Jordan Glenn, and Cory Wright on flute, clarinet, alto and tenor sax, Simple Excesses brought expansive rigor to Honda’s music, which toggled effectively and often conspicuously between fully notated passages and extended open improvisation.

Honda’s music is usually many things at once, and requires musicians who are comfortable using a variety of strategies in the course of a piece. As the title suggests, her episodic Where, Where and Here It Was unfolded as a series of movements, from swirling piano-driven filigrees to a delicate flute solo floating above Glenn’s current of brushes on snare to a clattery carnivalesque passage over a galumphing arco bass line.

Like most concerts presented by the get-musicians-paid organization Jazz in the Neighborhood, the show featured a rising player as a special guest, in this case San Francisco violinist and board-certified music therapist Eva Piontkowski. She joined Honda for an extended duet on The Perfect Shadow of an Imperfect Realm, a piece that revealed itself as a series of feints and melodic side alleys, with both players evading and reconnecting with each other. Piontkowski also joined the quartet in the second set for Walking By, playing a gorgeous unison line with Wright’s surging alto sax.

Let me take a moment to talk about Wright, a manifestly gifted improviser who is usually found adding a jolt in intelligence and energy into other people’s ensembles. He’s recorded only one album under his own name, 2013’s Apples + Oranges (Singlespeed Music) by the Cory Wright Outfit, a quintet session that also features Jordan Glenn. Intentionally catching him on a gig requires reading the fine print to see who’s in the band, but Wright’s presence on stage is a reliable indicator that something interesting is going down. He’s back at the California Jazz Conservatory on Tuesday Jan. 15 with guitarist/composer Nathan Clevenger’s eight-piece group.

Honda played a brief, high-energy second set that drew more heavily on jazz and funk rhythms. She responded with some of her most rambunctious piano work, pushing off against Wick’s firm but yielding lines. It was a most satisfying conclusion to a far-ranging concert by an artist who is in the midst of a fruitful and abidingly entertaining process of building her musical identity.

Starting the Year Off Jazzed

Ready for 2019’s full house of Bay Area jazz? Here are five January events to get you going.