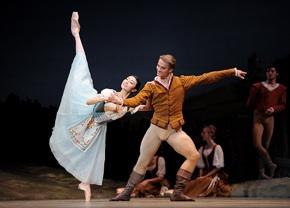 Giselle might have seemed merely an ordinary start to the San Francisco Ballet’s 78th season — a nice, now-familiar staging of this Romantic-era warhorse by Artistic Director Helgi Tomasson, a chance to glimpse new and newly promoted dancers in familiar roles — were it not for the sharply contrasting talents of two of the world’s most interesting ballerinas. Yuan Yuan Tan is Chinese, in her mid-30s, and so willowy as to be otherworldly, almost not human. Sarah Van Patten is American, in her mid-20s, a sensuous woman whose gift is to make every role she takes on flesh and blood.

The steady chance to compare these two outstanding artists — I shouldn’t cast this as a rivalry, though the idea is tempting — is as surprising a development in S.F. Ballet history as it is an enriching one. It all crystallized last year when the two dancers alternated in the lead of John Neumeier’s European Expressionist ballet The Little Mermaid (which repeats this season); both gave revelatory, breakthrough performances, but to see the always elegant Tan deform herself as the grotesque, titular sea creature proved more shocking than watching the always committed Van Patten flail with ungainly abandon. Then, this past weekend, the two were cast back-to-back as Giselle. Tan, for more than a decade one of the company’s biggest box office draws, had Saturday’s opening night. But Van Patten’s following is growing, and her debut in the iconic role sold out a Sunday matinee.

To be sure, Tan’s well-developed interpretation of steps burned into many balletomanes’ memories has plentiful pluses. She gives a spectacular second act, when the dead Giselle, transformed into a ghost of white gossamer, must defend her penitent Prince Albrecht from the vengeful forest Wilis.

The choreography of this act lends itself to contemporary extremes, and Tan works them, emphasizing 12 o’clock arabesque penchée (lifted leg straight to the sky in what dancers call the “ironing board” position), along with unfurling arms. In this act, Giselle has a strange jump with her legs tucked under her, back arched as though she’s being pulled by a gust of wind; Tan makes it an optical illusion. She had, too, a good partner in Artem Yachmennikov, a fresh recruit from the Bolshoi; he was refined and noble in a similar mold as fellow principal Tiit Helimets, but a bit more muscular, with juicy feet that made a simple series of changement jumps the most dazzling sight of the night.

And yet — Tan fanatics will take out the knives against me — I don’t find Giselle a great role for her. In the first act, her irrepressible flourishes are just stylistically inappropriate for an unaffected peasant girl. Her Giselle is too confident and coy for me to worry over as the disguised Albrecht woos her, Tan’s acting too premeditated. And even in Act 2, every move seemed designed for visual effect — see this famous step? see what I do with it? — rather than for emotional impulse.

Van Patten’s first outing in the role showed much room for improvement. Although the solid simplicity of her style makes her a believable peasant girl, her first act currently reads like a sketch. Her “mad scene” isn’t there yet, though I liked how she truly pushed and shoved through the crowd in a frenzy, and the decision not to stab herself with Albrecht’s sword (Tan went for the stabbing). And her Act 1 Giselle had a lovely humility, pausing from her dancing as though she couldn’t believe all that had just burst forth from her, and hoped she hadn’t made a spectacle of herself.

But Van Patten’s Act 2 was something more: deeply moving. She had the benefit of working with Tiit Helimets (also her Swan Lake partner), and the two had clearly developed a shared interpretation. In the wonderful passage when Albrecht senses Giselle’s ghost, but doesn’t see her yet, they shadowed one another’s movements perfectly, so that you saw him remembering her, almost trying to re-create her presence. And when he began to dance with her, her every movement became a gesture of forgiveness, her tilt forward into arabesque penchée drawn out slow and low, a bow of benediction.

You didn’t see “choreography” anymore — you saw the emotional story. Her passionate arms didn’t make a show of their elegant lines. They cried to Myrtha, the Queen Wili, Please, you can’t kill him. Then Helimets launched into a line of high, fluttering beaten jumps that must have lasted eight bars of music — the audience went crazy — and Van Patten ran out into his arms for her partnered arabesques, bottom foot just kissing the ground.

In both performances, the couples suffered from a crucial missing piece of Albrecht’s character change. The moment just after Giselle’s death when he realizes what he’s done either is badly staged or neither man has yet found the way to convey it.

Regardless of whom you see in this run, the corps is dancing beautifully, and the minor roles show off fresh talent. Newly promoted soloist Daniel Deivison-Oliveira is athletic but still a bit sloppy when set against Gennadi Nedvigin’s refinement in the peasant pas de cinq; in Sunday’s matinee, Isaac Hernandez (also now soloist) was in terrific form while corps member Lonnie Weeks was a scintillating discovery, dashing and sexy yet perfectly in control of his swift pirouettes.

Elana Altman as Myrtha, the murderous Queen Wili, was reason enough to see Saturday’s show: tense and skittish, with owlish wide eyes. Frances Chung, always technically strong, was too benevolent as Myrtha on Sunday. The orchestra sounded note-perfect under Music Director Martin West in its delivery of Adolphe Adam’s sweet score, which is rarely accused of musical greatness yet advances the story perfectly.

Three other ballerinas are cast as Giselle for this run and also well worth seeing: Tiny Maria Kotchetkova was heartbreaking in the role a few years back, while Lorena Feijoo gives a more Romantic-style interpretation (bent forward from the waist with always-rounded arms à la lithographs of the famous Marie Taglioni). Vanessa Zahorian is dancing anything she touches beautifully as of late. Van Patten will dance again Wednesday. Already the show is nearly sold out.