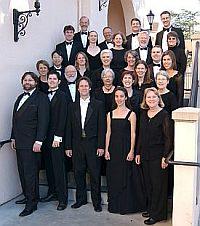 Rebekah Ahrendt on March 17, 2009
The members of the California Bach Society deserved all the applause they received on Sunday afternoon, plus more. Until then, I had not had the opportunity to hear the group since Paul Flight became artistic director. What a transformation! Although the personnel remains largely the same, Flight has made of the choral group a professional ensemble capable of every expressive nuance and glorious ensemble sound.

Performing at St. Mark’s Episcopal Church in Berkeley, CBS presented a concert that paired composer Heinrich Biber’s affective Requiem with Agostino Steffani’s emotive Stabat Mater. This program was certainly a novelty for Bay Area audiences, which rarely have the opportunity to hear Biber’s vocal works or anything by Steffani.

The two works require a flexible and highly trained chorus, as they are both in multiple parts. The Stabat Mater includes six independent vocal lines, while the Requiem features three ensembles of five parts each. Four excellent soloists, including Flight himself, added variety to the textures. Both works also included an accompanying group of strings, in six parts for the Steffani and five for the Biber. This multiplicity of performing forces gave Flight every opportunity to show off the strengths of his group.

Steffani’s work was a particular joy. My own interest in the composer stems from his involvement in diplomatic activities throughout his career, yet there is no denying his talent as a writer of vocal music. Just a month before his death, Steffani described his Stabat Mater, composed between the end of 1727 and the beginning of 1728, as his last and greatest composition. It is a work of profound religious expression — Steffani was also an important figure in the Catholic Church. From the simplicity of the single vocal line in the opening tercet (a three-line stanza of verse) to the complex double fugue of the last, the singers of the chorus demonstrated their affinity for the music as well as their ability to express the most subtle feelings.

Particularly moving was the responsory section of the ninth and 10th tercets. The clear, pure tone of soprano soloist Nicole Schuetz at “Eja, mater, fons amoris” (O mother, fountain of love) was echoed and amplified by the high voices of the chorus. Roles were reversed in the next tercet, “Fac, ut ardeat cor meum” (Grant that my heart might burn), when the low voices of the group were answered by tenor Brian Staufenbiel, whose rich tone and admirable declamation added much to the performance.

I was awed by bass Curtis Cook, who demonstrated complete command of even the lowest regions of sonic possibilities. Especially impressive was his rendition of the tercet “Fac me cruce custodiri” (May I be protected by the cross). Accompanied by a halo of strings, Cook’s velvet tones perfectly expressed the protection, fortification, and warmth of this section of the text.

Biber’s great Requiem was no less inspiring. Although this composer is better known today for his fantastic violin writing, he was in the employ of the Archbishop of Salzburg and provided a number of important sacred vocal works for that community. The polychoral Requiem must have sounded most impressive in Salzburg Cathedral, where the choirs could be distributed around the building; unfortunately, the design of St. Mark’s in Berkeley does not allow for that. Still, Flight’s smart arrangement of the singers in the performing space did allow the polychoral effects to come through.

This effect was beautifully achieved in the Agnus Dei. Introduced by the soloists, the circling, swirling, seemingly infinite theme is quickly taken up by the full chorus and strings, creating a feeling of eternal rest — yet a rest that is also full of the expectation of eternal pleasure. What a contrast that provided to the lines following the Dies Irae sequence, where infernal punishment and hellish pits were vividly evoked by the tortured, dissonant lines of the chorus. Glorious.

Regardless, I came away from this concert feeling inspired and hopeful. Paul Flight has truly performed miracles with these singers, and should feel justly proud of their accomplishments.