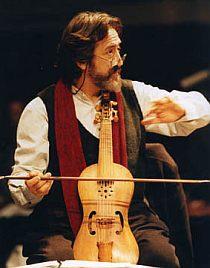 In the first of its two programs at Berkeley’s First Congregational Church this past weekend, Le Concert des Nations presented a potpourri of baroque classics titled “Les Goûts Réunis.” The title really ought to have been “Greatest Hits of the Baroque,” or — better — “Savall’s Number Ones.” Of the program’s six pieces, four were bona fide classics, the others evident favorites of Jordi Savall, the ensemble’s director.

The program opened with a rousing rendition of Jean-Baptiste Lully’s “Marche pour la Cérémonie des Turcs” (Turkish ceremonial march) from the music to Molière’s Le Bourgeois Gentilhomme. Anyone who has ever seen “the movie” (Tous les matins du monde) will immediately recognize this piece as being particularly associated with Savall. The suite also served as a fitting introduction to the evening’s theme.

The phrase “les goûts réunis,” meaning “the union of tastes,” was first used by François Couperin in 1724 to title a collection of music that exemplified the meeting of the French and Italian styles. For a Frenchman of the 18th century, one of the hallmarks of the Italian style was extreme virtuosity, especially on the premier Italian instrument, the violin. There was no shortage of stringed wonder on this program. The ensemble playing was glorious; Le Concert des Nations is still one of the top orchestras in the world for this repertoire.

A Welter of Colors

Before Friday evening, I hadn’t had the pleasure of experiencing Manfredo Kraemer live. The concertmaster of Le Concert des Nations and a world-renowned soloist, Kraemer proves to have a big sound (though admittedly my impression might have been colored by the fact that his violin was aimed directly at my cushy seat in the third row right). Kraemer was especially fine in a performance of Heinrich Ignaz Franz von Biber’s Battalia. As a member of the ensemble quirkily named the Rare Fruits Council, Kraemer has built up a well-deserved reputation as a Biber player.

I adore Biber, particularly when it’s played as marvelously as this. The piece — a programmatic depiction of a battle — was vivid from start to finish. In the section entitled “Der Mars” (The March), Kraemer actually got up and marched all around the stage while playing the tune. The audience loved it.

Biber’s work is a remarkable demonstration of how the “extended” string techniques “developed” by 20th-century composers were in fact nothing new. The Battalia is full of effects that we are accustomed to think of as modern techniques. In the first section there is col legno where the strings are struck with the wood of the bow. (The technique was first described in 1605 by gambist Tobias Hume — another composer who has benefited from Savall’s attentions.) The second section, “Die liederliche Gesellschaft von allerley Humor” (The dissolute company of all humors), is an Ivesian jumble of various drinking tunes played simultaneously — the result being complete cacophony. In “Die Schlacht” (The fight), Biber directs the double bass to snap the strings against the fingerboard in what we today call a “Bartók pizzicato.”

There were two concerti grossi on the program. The D-Major concerto No. 4 from Arcangelo Corelli’s Opus 6 is one of the composer’s best-known works. Rarely have I seen it performed so well. Violinists Kraemer and Mauro Lopez formed the solo group with cellist Balasz Mate.

The two violinists were rarely completely together, either here or in the Charles Avison concerto grosso later in the program. Somehow, that seemed not to matter much. As distinct soloists, Kraemer and Lopez presented two very different visions of violinistic virtuosity — Kraemer’s violin brash, muscular, and bright, Lopez’s subtle, luscious, and dark.

The Avison was a mild surprise. I had low expectations — mid-18th-century English composers are hardly known for their brilliance — and thus was pleased to find the concerto rather entertaining. Maybe it was the fabulous concertino playing (Kraemer, Lopez, and Savall), or the fact that the themes for at least two of the movements were originally composed by Domenico Scarlatti.

Or maybe it was because the work that followed it was so dire. A set by Antonio Rodríguez de Hita, chapel master of the Palencia cathedral and the Monasterio de la Encarnación in Madrid in the later 18th century, made Avison look like a master. Savall has made a career out of dusting off forgotten Spanish composers, but this is one who might better be left unheard. I could say that if I never heard the Música Sinfonica para los Ministriles (music for the cathedral musicians) again, I would be pleased, but then I realized that even if I did hear it again, I probably wouldn’t recognize it. It was eminently forgettable.

The thrilled audience demanded three encores. The first was a piece titled “Les Americains,” from a ballet originally danced for Louis XIII. Savall explained that, even though the title referred to Native Americans, the audience might find some relationship to music of the United States. (In fact, Kraemer managed to sound just like a country/western fiddler.)

The second encore was another piece from the early 17th century — the “Bourrée d’Avignon.” The arrangement included a lovely solo for Savall. Finally, Savall told the audience that the concert really must end, and end it did with the lively Entrée des Matelots (Sailors’ dance) of Marin Marais. I would have loved to hear the group perform more music like these encores, rather than the works of Avison or Hita.