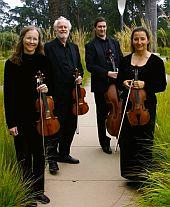 Rebekah Ahrendt on June 24, 2008
In the last decade of his life, Haydn entertained a number of visits from Georg August Griesinger, who transcribed their conversations and published them as a series of biographical notices. One of the most famous and controversial statements to appear in Griesinger's biography was one in which Haydn describes being cut off from the world at Esterháza, with no critics around to confuse or annoy him. The outcome of this, he said, was that "I couldn't help but become original" (so musste ich original werden). Haydn's exclusive contract with the princes of Esterházy gave him a fine group of musicians to work with, as well as a secure employment environment in which to conduct musical experiments and explore original ideas. That is not to say that Haydn was not influenced by the outside world. Rather, as violist Anthony Martin pointed out to the audience at Saturday's performance of the New Esterházy Quartet, Haydn's knowledge of and exposure to the musical worlds outside the Esterháza court greatly influenced his writing. Saturday's program, titled "Haydn in Hungary," featured quartets that bring to mind images of Hungarian peasants or Gypsies. Martin mentioned a number of "Hungarian" moves that can be heard in these quartets, including anything that sounds bizarre, Gypsy, or Eastern, or bravura fiddling, or unexpected harmonic dodges — basically, anything beyond the bounds of "normal." That is not to say that these moves are authentically Hungarian. In fact, the same tricks are often referred to as being "Polish" or "Turkish" (as in Telemann's “Polish” music). Rather, the foreign turns in these quartets merely play at being Hungarian, as only Haydn knew how to play. It should, perhaps, be remembered that another meaning of “original” is “bizarre.” Possibly the best example on the program of Haydn's "originality" was the Quartet in C from Op. 54 (1788). The opening Vivace features surprising harmonic moves coupled with bravura playing that then descends to street level in a closing hoedown. The second movement opens with an Adagio reminiscent of a fiddler strolling through a dimly lit restaurant. Lisa Weiss’ violin danced nimbly and seductively over the minor musings offered by the rest of the quartet. The music then segues into a Menuetto spiced with chromaticism. Unexpectedly, another Adagio follows, which turns out to be a slow introduction to a Presto finale. But it doesn't end there — rather, Haydn closes with an Adagio that recalls the movement’s introduction. This quartet, unfamiliar to many, so transgressed the boundaries of "normal" that the audience at St. Mark's Lutheran Church hardly knew when it was time to applaud.

The Quartet in D Major from Op. 20 includes a raucous Menuet labeled “alla Zingarese” (that is, in Gypsy style). The title alone builds up a certain expectation in the audience, and, indeed, the piece plays on the stereotypically “Gypsy,” with strong accents and heavily syncopated rhythms, all highlighted by NEQ’s rustic performance. Cellist William Skeen shone in the Trio, which is really an extended cello solo with simple accompaniment from the higher strings. All the players were given solo opportunities in the second movement of this work, a variations set in the minor mode (which is the only theme and variations movement in Op. 20). Martin on viola and Katie Kyme on second violin played a gorgeous duet in the first variation, followed by a stately solo for Skeen in the second. The performance was so good, and the music so lovely, that I was disappointed when the movement came to an end. I felt much the same way about the brief set of variations in the D-minor quartet of Op. 76. Although this second movement is rather more lighthearted than the Op. 20 variations, it contains a number of charming moments, including the “broken record” effect of continuously falling thirds and fifths, played beautifully by Kyme on first violin. But repetitive falling intervals seem to be the main idea of this work, which earned it the sobriquet of “Quintenquartett” (Fifths). It is probably the most famous of Haydn’s quartets in the minor mode, and rightfully so, as the NEQ demonstrated. The work also features one of Haydn’s favorite tricks — a Menuet that is nothing but a two-part canon at the octave, played in octaves by the violins versus the viola and cello. Octave doubling was one of the sins that Haydn’s critics often accused him of, yet this movement demonstrates the simple joys it can induce. Octaves also feature in the Andante of the B-minor Quartet, Op. 33. A naive tune played in octaves against a repeated dissonance in the violin seemed to be the NEQ’s favorite part in this concert, as every time they came back to it, they all smiled broadly. That is one thing I like so much about this group: They actually seem to truly love what they do, and are pleased to share it with their enthusiastic audiences. And boy, can they play Haydn. Over the past season, the group has presented 40 of Haydn's 68 string quartets. They plan to perform the remaining quartets next season, but Martin pointed out that they only have five concerts scheduled. Let us hope that the ensemble receives the funding for the two additional concerts required to perform the entire cycle. That way, their original idea of a complete performance of Haydn’s “original” string quartets will be realized.