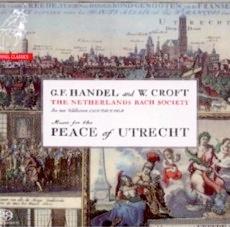 A Glorious Handel Te Deum From the Netherlands

The city of Utrecht, Netherlands, is gearing up for a huge celebration in 2013 to celebrate the 300th anniversary of the signing of the Treaty of Utrecht. This momentous occasion signaled the end of the War of the Spanish Succession, and reaffirmed the European Balance of Power that was so trumpeted by political philosophers of the period. The influence of the Dutch on these proceedings was actually minimal, and their gains from the truce were modest. But that fact hasn’t stopped the city and province of Utrecht from investing in a party that will rival the pan-European celebrations that followed the actual Treaty’s signing.

One of the first anticipatory fruits of all this excitement is the Netherlands Bach Society’s recording of music written by George Frideric Handel and William Croft as part of the British celebration surrounding the treaty. If it is evidence of Utrechtian products yet to come, then I heartily await them.

Te Deum IV: “When thou tookest
upon thee to deliver man”

Ode for the Peace of Utrecht: Overture


There is very little that anybody could dislike on this recording. The disc opens with Handel’s celebrated Utrecht Te Deum, a work full of formal inventiveness, and a fluid mixture of homophonic and polyphonic writing that leaves the head spinning. The choir throughout is marvelous; conductor Jos van Veldhoven coaxes a crystalline performance from the ensemble so that all of Handel’s dense contrapuntal writing sounds clear and precise. Those long bursts of melismatic exuberance that can sometimes come across as turgid sound here refreshingly bouncy and always clear.

The soloists also deserve accolades for their expressive singing. In the Te Deum’s sublime “When thou tookest upon thee to deliver man,” four solo voices joined in a moment of spine-chilling beauty, unaccompanied, followed by a sudden explosion of choral exclamation, expertly timed and thrillingly executed. This moment must rank in my personal top 20 memorable bits on choral recordings — a real sit-up-and-listen effect. Throughout, I could also listen to the disc without the liner notes and still understand virtually every word.

The sound of the disc is clean and crisp. This is the first recording that I’ve heard from Haarlem’s Philharmonie, a building in central Holland whose official press materials claim to be the most ambitious building project among concert halls in the Netherlands, blending modern construction with antique original building materials. The acoustic is reverberant without being washy, which allows for that careful balance between warmth and clarity so necessary for music like this that alternates between solo movements and works of the densest counterpoint.

Occasionally, the recording engineers get in the way, such as at the opening of Croft’s anthem, when the theorbo is recorded so closely that I thought it was a strange percussion instrument reflecting the text’s references to cannons and rattling drums. This effect would doubtless not be reproducible on a concert stage, so it seems that there was a bit of unnecessary electronic manipulation here. There is also some occasionally overbearing continuo playing, accompanied by a concomitant increased interest on the part of the recording engineer.

Some attention should have been paid to editing the liner notes. There are unfortunate typographical errors in the texts, including botched line lengths. Biographies of the soloists — several of whom were new names to me — were nowhere to be found, and it wasn’t even clear which tenor soloist was singing on which tracks. The program notes from Veldhoven have some bizarre turns of phrase, including a moment when he apparently wonders why the word cannon appears in a work about the quelling of war. Surely this confusion is a result of botchy editing or translation, as Veldhoven’s deft coaching of the chorus’ diction, tempo, and musical phrasing shows him to be as intelligent and insightful as he is expressive.

The disc marks the premiere recording of Croft’s Ode for the Peace of Utrecht, and it is an interesting piece, indeed. It opens with a movement marked “Vers,” a gesture to the older “verse anthem” tradition that featured highly trained choral soloists, able to embellish elaborately whenever the music called for it. The concluding multisection chorus, “O Mighty ANNA!,” ends with a brilliant imitative statement of the final stanza, with rapid alternating melismas of which Handel himself would have been proud.

But that grand concluding movement seems to have required virtually all of Croft’s compositional energy, while Handel always seems to toss off such movements with nonchalance. This obvious disparity makes me wish that Croft’s piece had come before, rather than after, three-quarters of an hour of Handelian demonstrativeness. When next I listen to this disc, I may program my music player to present these pieces in a different order, so that Croft’s inventiveness won’t be overshadowed by Handel’s grandeur. If the Netherlands Bach Society turns this glorious recording program into a concert program at the upcoming Utrecht celebrations, I’d advise them to do the same.