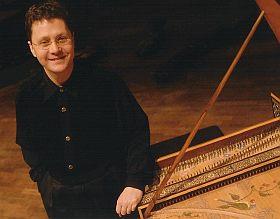 After I was admitted to the Conservatory in the Hague, I was allowed to see my adjudication sheet. The director had written one sentence: “He has fast fingers.” Bemused, I showed this to my teacher, who clasped me on the shoulder, and said in the most comforting way possible, “That was not a compliment, my boy.”

I’d levy this same “criticism” at Jory Vinikour, who performed an all-Handel recital Sunday at MusicSources in Berkeley. He certainly has fast fingers, especially in his left hand. It’s rare to hear a harpsichordist with such verve and enthusiasm, or such clarity of articulation throughout the instrument’s range. Vinikour proved, with aplomb, that harpsichord keys (on a good instrument, like MusicSources’ 1978 Taskin by John Phillips) really can rebound quickly, and that those resonant notes in the bass really can have sparkle in fast passagework. And, if it’s done with panache, the audience will say “Wow!” and “Woof!” and “Whoosh!” and all the other things I heard from them at the ends of those swirly, twirly scalar passages. And yes, Vinikour did it with panache.

There is criticism buried in the last phrase, but that’s about all. To be fair, Handel could write some pretty vapid music. He composed running scales like nobody else (except the people from whom he was fond of stealing), though after a few minutes of flourish a listener starts wishing for something of substance.

Yet is it actually Handel’s fault? I’ve been living with this repertoire for years, and am always determined to find the real music behind the flash. After all, Handel composed some of the most sublime music in history, and he was a great keyboardist. So, shouldn’t there be a truly profound structure behind the ornament in the keyboard music? As hard as Handel tried to avoid the charges of “turgidity” that were levied against J.S. Bach, his exact contemporary, surely a bit of that Teutonic seriousness lurks beneath the surface.

The structure is there, and it’s up to the performer to bring out that substance. But, in general, Vinikour’s performance lacked attention to large-scale structure, slamming past more sonorous, slower portions in a seeming rush to get to the flashy bits. He played with a restless energy and enthusiasm that was exciting, though he missed opportunities for variety that would have helped balance the atmosphere.

For instance, his massive Chaconne in G Major was most impressive, but he played with such uniformity of tempo that several of the more weighty couplets sounded perfunctory and lackluster, while the virtuoso bits sparkled with brilliant intensity. Conversely, his tempos for the final presto of the Suite in D Minor, HWV 428, were all over the place. This movement is a reduction for solo harpsichord, by Handel himself, of one of his organ concertos. No ensemble would ever have managed to follow Vinikour’s manic tempo shifts between ritornello sections and solo passagework, and I couldn’t see any justifiable artistic decision to inspire them.

There was a telling difference, too, when a string band came out and joined Vinikour for a performance of the original concerto arrangement of this piece. Here, he was reined in by his fellow musicians’ need for clarity. Vinikour still found opportunity to show off his macho chops, but also demonstrated his ability to perform as a fully mature artist, with sensible phrasing and a good, clear understanding of the concerto’s ritornello structure. And Handel’s music fared all the better for this difference.

The high moment of the evening was Vinikour’s performance of the Suite in G Minor, HWV 432. Here, his Andante was singing and melodic as he explored the full, resonant possibilities of MusicSources’ instrument. His Sarabande was stately and measured, and he took the necessary time in the famous Passacaglia for us listeners really to settle into the inexorably growing density of passagework. By the time he hit those lightning-fast passages in the left hand, we’d heard enough “vroom!” out of the harpsichord to balance all the ensuing “whoosh!”

As a conclusion to the program, Vinikour offered his own arrangement of a concert aria for soprano and orchestra. This was the first time that I had heard French soprano Céline Ricci, who joined Vinikour and his little string band for only this one selection. The piece is a sort of keyboard concerto, with the singer making interjections, so we didn’t hear enough of Ricci’s deep, velvety voice. I look forward to hearing more of it in April, when she makes her premiere with Berkeley’s Philharmonia Baroque Orchestra in Handel’s Athalia.

Vinikour’s arrangement was brilliant, in both senses of the word. Plenty of flashy scales were balanced by a sensible continuo style in the vocal segments. Here, as in the G-minor suite, the keyboardist injected a much-needed dose of sobriety into the manic atmosphere he had established, and the result was richly satisfying.

So there is something to Handel’s keyboard writing, after all: an attempt to explore as many of the instrument’s sonorities as possible. But to be successful such exploration takes as much creativity from the interpreter as it did from the composer. That composer was a performing keyboardist, after all. His written music may very well be sketchy records of his famously effective performing style, and a performer of Vinikour’s caliber would do well to remember just how much responsibility falls on the performer’s shoulders to point to the substance behind the flash of notes on the page in this and so much other 18th-century music.