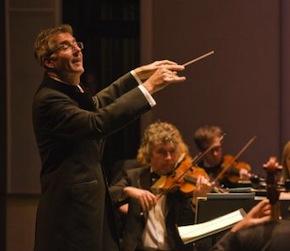 Alexander’s Feast, the first of the later oratorios by George Frideric Handel to catch on with London audiences, sparkles with surprises. Indeed it did at the Carmel Bach Festival on Sunday afternoon. But that should shock no one since the work had never before appeared in the festival’s repertoire. Better late than never fits nicely as the venerable CBF celebrates its 75th season.

Paul Goodwin’s production proved to be so entertaining it raised the question of why this enchanting work failed to attract the three previous festival music directors? In truth, Handel has had spotty shrift in Carmel — long dry spells with sudden bursts out of the shadows, most notably with Xerxes (1994), Messiah and Dixit Dominus (2002), and Israel in Egypt (2006).

Alexander’s Feast or The Power of Music sets John Dryden’s 1697 ode honoring Saint Cecilia, the patron of music. It depicts Alexander in Persepolis feasting after his defeat of Darius, the Persian king. Handel’s setting, first heard at Covent Garden in 1736, organizes material from the ode into five linked sections consisting of recitatives, airs, and choruses. The first is brightly festive as befits the conquest of Persia and culminates in paeans to Bacchus and wine with noisy natural horns. In the second, Alexander grows vain with drink as the mood darkens on an image of the dead, friendless Darius. The third turns sensual as Alexander is soothed by Thais, his consort; the scene is punctuated by a dramatic air (for soprano in this version, though for tenor in another one) on the futility and waste of war. The fourth section, opening Part 2, finds Alexander one again enraged by the slaughter of his soldiers in battle. Finally, the narrative gives way to praises for Cecilia, brilliant and triumphant. The work’s dramatic imagery and effects have convinced many that it is more a theater work than an oratorio.

Echoing Handel’s own practice, Goodwin dropped the Concerto in B Flat, Op. 4, No. 6, into the first section, its solos split between organ and harp. J.S. Bach’s Orchestral Suite in D appeared following the interval, its Air for G String replaced by an homage to that beloved movement titled “Midsummer Air” by Ohio-born Curt Cacioppo, a mood piece wearing velvet; it moved in and out of focus. The Bach suite was brisk and bouncy, with mostly heavy pulses. It led directly into Part 2 of the Handel.

Goodwin performs with high energy and physicality. Last year’s St. John Passion was as darkly intense as this was brightly intense. Wit was called for, especially in the Bacchus scene, and Goodwin was game for it. Yet several expressive details were glossed over at tempo when they could have been coaxed to reveal their special charms with slower pacing and better modulated dynamics. Overall, the mood, even in its variety, suffered a sameness of spirit.

The renovated Sunset Theatre, which opened in 2003, lacked sufficient interior space for optimal natural acoustics, so an electronic sound enhancement system was installed. It can amplify sound in the hall and also extend the decay (fade) time after the music stops. It was then, and remains, controversial; some presenters reject it out of hand, others have used it insensitively.

Goodwin is the first festival conductor to engage the system experimentally, alongside the system’s original acoustic engineer. He is using at least two different settings: For Bach’s Mass in B Minor, he wanted to create an effect of hearing the work in a church, hence a longer decay time, but without losing essential clarity, as he explained in an open rehearsal a week earlier. For the Handel program, the decay time is shorter. At the Sunday performance, undesirable artifacts were evident, leaving slight discrepancies between what the eye saw and what the ear heard. Better than in past Bach Festival productions, perhaps, but still needing more fine tuning.