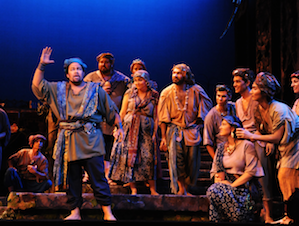 Even if Carmen had never happened, Georges Bizet’s three-act opera The Pearl Fishers vouchsafes his place in history. Any doubters should make their way to Opera San José’s new production, which opened last weekend at the California Theatre. The 24-year-old former child prodigy’s brilliance is evident throughout the piece as he turned something of a sow’s ear of a libretto into a masterfully organized and coherent display of musical theater.

While most famous for its often-excerpted tenor/baritone duet and its tenor solo aria, both occurring in Act 1, Bizet hangs generous musical flesh on the thinnest bits of Eugène Carron and Michel Carré’s flash-in-the-pan narrative. The popular melody of the duet, “Au fond du temple saint,” in which the two friends, Zurga and Nadir, renew their earlier pact to end a competition for the heart of Léïla, is recalled in new attire each time their love for her, and Zurga’s jealousy, are rekindled. The tune tolls like a bell throughout the succeeding acts, restoring emotional focus with each reiteration.

For its first staging at the California, OSJ engaged Charlie Smith to design an ancient Brahman temple, partly ruined and overgrown, with Hindu motifs on its wall panels. (Hindu motifs also inform Lise la Cour’s choreography.) With Smith’s boxy, static set, the burden of mood and times of day falls to Pamila Gray’s lighting, which proved especially dramatic in the wild storm scene of Act 2. Andrew Whitfield’s OSJ chorus has much to do both in the outer acts and at the conclusion of Act 2, and delivers it all with gusto.

The three principals — Zachary Altman (Zurga), James Callon (Nadir), and Melody King (Léïla) — made their OSJ debuts Sunday afternoon. (They join two other new company residents who appeared in the Saturday cast.) Initially, all three were stiff, but soon warmed into their roles, which allowed their vocal production to bloom. Callon’s light, lyric tenor at first sounded the smallest. His Act 1 aria, “Je crois entendre encore,” was a thing of delicate beauty, ideal for this repertoire, but thereafter grew in amplitude.

King’s richly grained soprano had little chance to warm up before being thrown into coloratura display when her prayer to Brahma (she’s the chaste priestess du jour) grows to a delirious outburst of love for Nadir. Altman’s resonant baritone seemed nervous and insecure at the start, but flowered into base hits, then home runs, as his character developed; Zurga is the opera’s most complex. Silas Elash, a veteran OSJ stalwart, was solidly consistent as the priest Nourabad.

Stage director Richard Harrell, of the San Francisco Conservatory, maximized the set’s potential by deploying action from the stage floor up a steep flight of stairs to a parapet. Anthony Quartuccio, another OSJ veteran, conducted the orchestra with seeming ease and no small grace. Except for the hushed, intimate moments on stage, he let his musicians play out. (He’s a candidate this season to replace John Larry Granger at the helm of the Santa Cruz Symphony.)

The two casts for The Pearl Fishers continue in alternation through Sept. 23.

For those who can’t get enough quality opera in smaller houses, Hidden Valley Opera in Carmel Valley has three performances remaining this week (through Sept. 15) of its new production of Puccini’s La bohème. Stewart Robertson conducts Kenneth Roberts’ reduction of Puccini’s orchestra to nine musicians, which is more than adequate for the lively, intimate Hidden Valley venue. Among the fine cast members are sopranos Rebecca Davis and Sara Duchovnay, plus a startlingly gifted, award-winning tenor discovery, Ben Gulley.