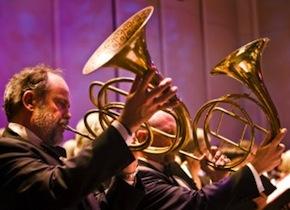 Friday’s Main Concert at the Carmel Bach Festival reiterated a long-standing festival tradition of mixing Baroque masters with those of the 19th and 20th centuries. Conductor Paul Goodwin’s program, titled “Music of Dance,” paraded J.S. Bach’s Orchestral Suite in D, BWV 1069; the concert suite from Stravinsky’s ballet Pulcinella; and Brahms’ Symphony No. 2 in D. The Stravinsky discharged enough sparkle of light and transparency to cast shadows around the Bach and Brahms, the better to throw them both into more vivid relief, and to show off what a fine stable of players now answers to Goodwin’s call.

The gleaming Pulcinella, based on tunes by Giovanni Pergolesi (1710–1736) and apparently several others of his generation, also made the two German works sound texturally thick by comparison, especially with Goodwin’s generally brisk tempos. Bach’s insistence on keeping his players busy, except those passages where some of them sit by tacitly, can reward the attentive listener with contrapuntal weavings or richly constructed harmonies. (Even when some players are given rest, others can be heard to make up for their absence; the first bassoonist in the intimate second of the two bourrées seemed to carry all the notes of the piece without a moment to catch a breath.) The Brahms, by contrast, feeds the appetite of those who relish the classical forms dressed up in latter-day symphonic opulence made generously expressive by way of Wagnerian elasticity of tempos.

For the Brahms, Goodwin sought to re-create the orchestra for which the composer wrote his symphonies. Thanks to the concerted efforts of the great Charles Mackerras, the Scottish Chamber Orchestra, under Mackerras’ direction, had already done that research and played them in an acclaimed 1997 recording on the Telarc label. Although Brahms conducted the symphonies in large cities, including Vienna, with orchestras numbering more than 100 players, the originals were written for Karlsruhe and Meiningen, whose orchestras called for not more than 50 players. So far so good.

But Goodwin also decided to use natural (valveless) horns and Baroque trumpets. This was misguided. After the development of the piston valve in 1814, credited to Heinrich Stölzel, composers and brass players quickly abandoned the natural instruments. The valve removed the “natural” obstacle that prevented the brass from playing a complete chromatic scale at the lower end of its compass. (The trombone had overcome that limitation centuries earlier.) Meanwhile, horn players were able to avail themselves of a second overtone series by stuffing their hand into the bell, yet with a muting effect that greatly changed the tone color; the open, golden unmuted tone was suddenly reduced to a nasal snarl. (Listen to Mozart’s horn concertos played on natural horn to hear the effect.)

The Stravinsky discharged enough sparkle of light and transparency to cast shadows around the Bach and Brahms.

As well-documented in a BBC Radio 3 program called “The Romantic Horn,” the valve both filled in the gaps in the overtone series and allowed the player to produce an even tone color from bottom to top. With its ancient hunting tradition, famously heard in forests and on fields, the horn’s persona was now changed forever. It took no time to catch on. If the valve was the bait, Carl Maria von Weber’s opera Der Freischütz of 1821 set the hook. The Age of Enlightenment had restored God to nature, the public taste for the supernatural filled forests with enchanted sprites and terrors, and heartsick poets yearned for love beyond reach. The “romantic” horn would carry into the 19th and most of the 20th centuries.

Brahms thought in terms of the natural horn but understood perfectly well the consequences when it was used to play his chromatic passages.

In an interview, Mackerras once called out the very symphony on this program to make the point, noting that the opening of the first movement lay perfectly on the natural horn but predicted that the long chromatic solo heard just before the end of the movement would sound “quite ridiculous” on the valveless instrument. And so it did on Friday in Carmel (not to slight the skilled player, however). Goodwin’s novelty proved a distraction that put the brass players, and some in the audience, on edge.

That may have led to the few moments in the performance that saw sections go briefly out of phase; probably this Friday’s reprise will have corrected those. In general, Goodwin got plenty of energy from his musicians, and the violin sections, seated opposite each other at the front of the orchestra, produced the antiphonal moments called for by the score. As his music demonstrates, and as Mackerras acknowledges, Brahms thought in terms of the natural horn but understood perfectly well the consequences when it was used to play his chromatic passages.