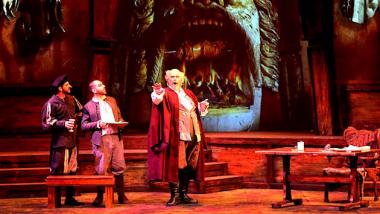 This Falstaff’s biggest comedic shortcoming lies in a self-conscious staging. Bardolfo’s large fake nose, the men’s over-rouged cheeks, and Ford’s spiked hair suggest an over-the-top approach. Badly photoshopped projected backdrops with distracting animation reinforce this. The acting is often pure mugging, especially when Alice and Meg are playing scenes for Falstaff’s benefit. The production keeps screaming that this is comedy — and that kills its comedic impact. Scenes feel freshest when the singers stop overacting: In Act I, for instance, Meg, Alice, Nannetta, and Mistress Quickly plot their revenge with delicious, unaffected relish.

That’s not to say West Bay Opera’s Falstaff isn’t worth hearing. Under the baton of WBO General Director José Luis Moscovich, the orchestra provided wry punctuation for the text. Dramatic, dark-hued strings set the midnight mood for the final scene perfectly (far better than the projected mist swirling on the backdrop). The difficult final fugue — (“Tutto nel mundo è burla” (Everything in the world is folly) — proved a musical triumph and ended the opera on an energetic note.

As usual, West Bay Opera served up a cast of singers worth hearing. Baritone Richard Zeller made his West Bay Opera debut as Falstaff. From his booming “honor” aria in the first scene to his tossed-off interjections of fear in the last, he commanded attention. Michael Orlinsky and Kiril Havezov were in fine voice as his graceless servants, Bardolfo and Pistola. Baritone Krassen Karagiozov stole scenes as Ford, with his dusky sound, smooth legato, and jealous rages. Soprano Taylor Haines’s Alice Ford sported a shimmering, varied tone and mischievous personality. She was ably supported in her schemes by Patrice Houston’s chesty-voiced Mistress Quickly and Veronica Jensen’s warm-voiced Meg. The opera’s young lovers get some of the most lyrical music. Dane Suarez’s bright tenor (as Fenton) and Anastasia Malliaras’s silvery soprano (as Nannetta) made the most of it.

Dragging down the overall professionalism of the production was a lack of attention to detail. A misspelled title (‘Fallstaff’) and badly timed supertitles frustrated me, as did the aimless milling about and general listlessness of the chorus in the final scene. The placement of the brass section onstage made their entrances startle and their long lines compete with the singers. Otherwise-elegant women’s costumes were ruined by a petticoat shortage, leaving hoop lines showing through skirts and bare skin peeking out from beneath hems.

Falstaff is an ambitious programming choice for any opera company. It has all the musical challenges of Verdi without the name recognition to bring in audiences. It’s a dramatically tight piece: Every word and note serves the plot. But that plot can seem frivolous if the characters treat it all as a game, without emotional stakes. Ultimately, that’s where West Bay Opera’s Falstaff falls short. I laud their ambition and the musical talent they have brought together. Unfortunately, it’s unclear what those are in service of: This Falstaff does not provoke many laughs, or have much to say.

The Bay Area premiere of Verdi’s family tragedy does a neglected score justice.