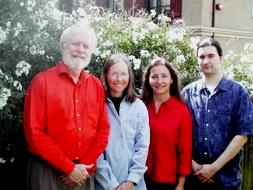 Jonathan Rhodes Lee on October 2, 2007
Ensembles generally slumber through the Haydn quartets, which are often relegated to opening-number status and overshadowed by those giant works from Beethoven that so often follow them. Not so with the New Esterházy Quartet, a young ensemble devoted, as its name implies, to the works of Haydn. In its all-Haydn concerts, audiences can hear how the passage of time matured and transformed the composer’s style, yet upheld that spark of originality (or perhaps idiosyncrasy) for which Haydn has always been famous. The quartet includes well-established members of the Bay Area’s early-music community — Kati Kyme and Lisa Weiss on violins, Anthony Martin on viola, and William Skeen on cello — and has planned an ambitious first season of 11 concerts devoted to Haydn. Saturday afternoon’s concert in St. Mark’s Lutheran Church in San Francisco marked the New Esterházy’s second performance, and was dedicated to the memory of beloved harpsichordist, conductor, foundation director, teacher, and author Albert Fuller, who had passed away the week before. In each half, the program juxtaposed an early work, the Divertimentos in D and F Major (Op. 1, No. 3, and Op. 2, No. 4, respectively), with a later piece, the Quartets in D (Op. 50, No. 6) and G (Op. 77, No. 1). Hearing these temporally bipolar quartets in close progression was instructive. The group eased into the opening of both halves of the concert with divertimentos composed in 1762. Haydn bestowed this genre title on keyboard works as well as string ensemble music and even symphonies, most frequently during the earlier years of his output. At the time of their publication, Haydn often changed the titles to include the more familiar sonata or quartet label, but their original titles somehow better capture the spirit of the music. These are jovial and collegial works that make sure each player has something interesting to enjoy. The string divertimentos also show Haydn’s connection to the past with their well-constructed contrapuntal lines. Whereas Mozart sometimes privileges soaring melodies over horizontal clarity (often relegating the inner parts to monotonous “chunk-chunk-chunk” accompaniment patterns), Haydn makes sure that every player always has something to do.

Skeen on cello appeared to be having the time of his life in the third movement of the Op. 1 Divertimento, finding time to shape little musical “gasping” gestures audible amid the thicket of sound. Other groups might have been tempted to blaze through a little piece like this, marked presto and filled with little fioratura ornamentation. The New Esterházys, however, are clearly enamored with Haydn’s capacity to generate unique experiences for each player, while still presenting a well-balanced whole. Throughout the concert the instrumentalists smiled at every witticism, were startled at every sudden modulation or quirky turn of phrase, and drove through the composer’s virtuoso passagework as if they were the most difficult sections ever played. The players were so completely absorbed with the music (and with one another) that it hardly seemed to matter whether the audience was there or not — a wonderful phenomenon to witness. The second work on the program was Haydn’s “Frog” Quartet, nicknamed after his death due to some wacky string-crossing figures in the final movement. Martin on viola offered a little apology for any intonation problems that might have occurred during these awkward passages, and, indeed, there were some moments in which the performance became slightly less than crystalline. But this stumble really didn’t matter. Let the ensemble worry about those difficulties when it gets into the recording studio, as is hoped they do. What I perceived were deceptive cadences that really deceived, sudden changes in modality and dynamic that were breathtaking, contrapuntal complexity, and a carefully controlled and contained excitement that felt ready to explode at any moment — but, equally remarkably, didn’t. The quartet also offered a fascinating example of sonority at the close of the first movement. After a long and densely packed movement, the group somehow managed to whittle away at the sound throughout the brief coda to produce a conclusion so pianississimo that it might have been described as the point where silence and sound meet. All this is not to say that the concert was not without its “wow” moments. The Finale of Op. 77, No. 1, composed on the brink of the 19th century, demonstrated that Haydn could write virtuoso music when he wanted to. The group’s rendering of the final vivace movement was blazingly fast, perhaps a little too fast for St. Mark’s live acoustic. The group suffered a little from some intonation difficulties here, evident at those moments in which Haydn reduces the texture down to a single tone that all the instrumentalists play in octaves, with the effect of yanking the listener in some unexpected harmonic direction. Occasionally, too, first violinist Weiss would sometimes forget herself, and become somewhat domineering, considering the even-handed contrapuntal writing in the inner parts. However, these were small gripes in an expertly polished performance. Many more important things were right: freshness, vitality, intelligence, poignancy, intimacy, and thrills. There’s little more that you could hope for from a chamber-music concert.