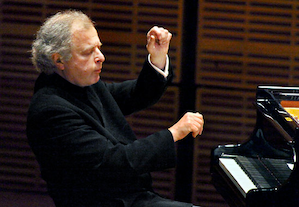 On the High Seas With the Remarkable András Schiff

Bach on the piano. … Questions surrounding this topic have become ubiquitous at preshow lectures and in program notes for piano performances of this standard repertoire. The arguments therein generally have a defensive tone: Yes, it’s OK to play this music on the piano; no, we don’t use lead-footed pedal technique anymore; yes, we do believe that understanding Baroque performance practice has value; no, we don’t play these pieces like pianists did in the 1950s; and so on.

Even András Schiff felt the need to make such pronouncements in his own notes to Bach’s six suites with preludes, the so-called “English” Suites, which he performed at Davies Symphony Hall on Sunday afternoon, presented by the San Francisco Symphony. Schiff pointed out that his foot wouldn’t come within a mile of the sustain pedal, and he emphasized that he had once studied these works with a bona fide harpsichordist (George Malcolm), thereby hoping to burnish his credentials as being “historically informed.”

This nod to history reflects an old animosity that is surely now diminished. Once-second-tier period-instrument practitioners now have undeniably virtuosic soloists, chamber ensembles, and orchestras, plus a healthy audience base. And the war that was fought between violinist Pinchas Zukerman and the period-instrument band Tafelmusik at the beginning of this century seems like a distant memory in 2013. Tafelmusik clearly won, and the period-instrument movement has definitively made its point, as is clear from Schiff’s little concessions.

The pianist’s playing at Davies Hall, however, told a different story. In technical terms, there was little that was “historically correct” about his approach. Schiff declined to differentiate between Italianate correntes and French courantes; in his performance, these were all fast pieces with “running” passagework — flashy music to follow the more contemplative allemandes that precede them. Schiff rendered Sarabandes with big, fat chords as quiet, contemplative pieces; on a harpsichord, such thick-textured works would by default be noisy. And his tempos, at both slow and fast extremes, far exceeded what would be possible on a period keyboard.

On Sunday he breathed new life into this nearly 300-year-old music, enthralling a cheering, foot-stomping crowd of some 2,500 people.

To point out this conflict between personal statement and musical execution is not to criticize Schiff. He is a consummate musician, one of the most highly regarded recording and concert artists of our time, and a giant among pianists. On Sunday he breathed new life into this nearly 300-year-old music, enthralling a cheering, foot-stomping crowd of some 2,500 people in a huge, arenalike space usually populated by a full orchestra. This single success is an immense accomplishment; the fact that Schiff has done it across the world for decades (he won his first Grammy for his recording of these very pieces in 1990) is not far short of a miracle.

Of all of Bach’s keyboard music, the English Suites are among the best suited for flashy, modern pianism. There’s nothing inherently “English” about them. They received their nickname from the fact that Johann Nikolaus Forkel, Bach’s first biographer, made an unsubstantiated claim that they were composed in honor of an English nobleman. Forkel must have misunderstood something told to him by one of Bach’s sons about the pieces having been inspired by the suites of a popular “English” composer: Charles Dieupart, a Frenchman who settled in London and published a set of similar suites there in 1701, one of which Bach quotes in his own set. Besides this small quotation, Bach’s suites followed Dieupart’s in number (six) and also by including hefty, difficult preludes. Dieupart’s follow the model provided by the French Ouverture, whereas Bach’s more often embrace the ritornello principle of Vivaldi’s concertos.

The preludes show the influence of Bach’s years in Weimar, where he first encountered Italian concertos, transcribing them in difficult and ambitious arrangements for solo keyboard. These transcriptions were the training materials for Bach’s own essays in concerto form, including some of the most scintillating among the English Suites’ preludes. The preludes demand technique of the highest caliber, and the modern piano is well suited to their flamboyance. Schiff’s performances of these preludes, and also of the equally flashy and difficult concluding gigues, were the high points of this recital, moments when the audience could wonder at the pianist’s infallible technique and athleticism.

Schiff’s performances of these preludes … were the high points of this performance, moments when the audience could wonder at the pianist’s infallible technique and athleticism.

Schiff’s succeeding dances may have strayed from the norms of performance practice as harpsichordists understand them, but there was one element that ran throughout the performance that was as historically accurate as it gets. Schiff proclaimed in his program notes, “To me, Bach’s music is not black and white; it’s full of colors. In my imagination each tonality corresponds to a color.” Schiff is on to something here, akin to discussions about the Affektenlehre (Doctrine of affections) among some of Bach’s contemporaries. They, too, saw something in keys — call it “color,” “mood,” or “affect” — that was to be sustained either throughout a single movement or in pieces of a shared tonality and mode. Schiff captured this idea beautifully. He has been playing these suites long enough that he has a crystal-clear vision of each of them as a whole, rather than just a jumble of dances. In Schiff’s hands, the collection was far more than the sum of its parts, showing a musician with artistic vision beyond mere technical mastery.

Beethoven once supposedly quipped, drawing on the fact that Bach in German means stream, that this composer’s name should have been Ocean. (“Nicht Bach, sondern Meer sollte er heißen.”) Indeed, Bach’s work is a capacious body, capable of sustaining myriad interpreters without being in the least impoverished. Bach’s “ocean” leaves ample room for all these approaches, each with its appropriate vector. I’m not sure that I would want to hear Schiff play this music in a more intimate setting, but I’m absolutely sure that I wouldn’t want to hear a harpsichordist perform these works in Davies Hall. This breadth and flexibility testifies to the enduring genius of Bach’s music, at home in the various venues and among the myriad audiences it encounters in the 21st century. And András Schiff is a welcome vessel churning these deep waters.