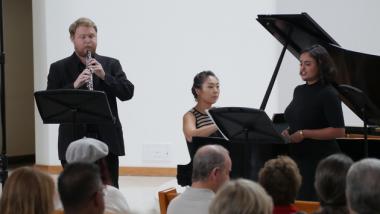 Perhaps in the spirit of Thanksgiving, Kaleidoscope Chamber Orchestra’s Sunday concert at the First Presbyterian Church in Santa Monica was laid out like a seven-course tasting menu. Its flavor profile blended the familiar (J.S. Bach and Clara Schumann) with the zest of contemporary creations by five women composers: Sarah Kirkland Snider, Karen Lemon, Emily Doolittle, Missy Mazzoli, and Ingrid Stölzel.

The program, which included one U.S. premiere and three West Coast premieres, featured a variety of instrumentation for piano, flute, oboe, violin, soprano voice, and a spoken role for a narrator.

The opening selection, Bach’s Sonata for Violin and Piano in B Minor, BWV 1014, served both to open the concert and introduce compositional elements and atmospheres that would be reflected throughout the program — some literally, more often abstractly and emotionally. By the time the program reached the Three Romances for Oboe and Piano by Schumann, the concert felt like it had arrived at some verdant island in the stream. Misbegottenly, its elegant performance was followed by a shrill, ill-timed pitch for money that jarringly interrupted the otherwise perfect balance and flow of the concert.

The contrasting moods of the Bach sonata (deftly executed by Hoffman and Kim) — introspective, ebullient, bright and geometrically precise — provided a sense of compositional linkage with the rest of the program.

Faced with the daunting task of composing a solo work for the American Pianists Association’s Classical Fellowship Awards, Sarah Kirkland Snider created The Currents. A blend of bravado virtuosity and delicate, inward-looking simplicity, the piece is a balancing act of temperaments and themes suggested by the title.

Simple figures in the left hand are repeated in almost minimalist fashion, while the right hand goes off on more complex bravado forays. Virtuoso passages in forte to triple forte are built upon complex harmonies and dissonances. The thunder passes and gives way to lyrical lines of single notes that hang suspended in the air. Kim gave a deserving interpretation.

One mirror cracked by Karen Lemon, which received its U.S. premiere, is a work for piano and oboe, self- described as alternating between “angry” and “placid.” Lemon might have also added that between these two emotional polarities the piano and oboe parts delve into various grey zones of melody and mood that separate the two. The piano often takes on the role of casting harmonic shadows, with the oboe gliding above in high-flying counterpoint (casting us back to Bach).

The idea to program Emily Doolittle’s musical fable, The Wise Daughter for violin, piano, and narrator, may have seemed like a good idea on paper. But in performance, it was defeated by the hall’s exceedingly bright acoustics. Hassan’s high-pitched voice, even though she tried for precise diction, was lost in a muddle of overlying tones.

As an introduction, Hoffman explained they had pondered whether to use a microphone and decided against it. What did come through was Doolittle’s ethnically flavored music with its blend of modern elements with the musical traditions of the Russian Jewish shteltl.

Missy Mazzoli is one of the most sought-after of the new generation of women composers, with interest that includes a commission from the Met for a new opera. Her work for solo violin, Dissolve, O My Heart, evolved, she writes in the program, out of a conversation over Chinese food with violinist Jennifer Koh. “She told me about her Bach and Beyond program that combines Bach’s sonatas and partitas with newly commissioned works.”

Dissolve, O My Heart begins with a statement of the opening D-minor chord from Bach’s Chaconne. But that is the extent of the quotation. Expertly performed by Hoffman, the rest of the piece, which is only about five minutes in length, goes off on a series of technically dexterous excursions, tangents, intersections, and recapitulations of ideas and colors.

After the dulcet performance of Three Excursions for Oboe (romantically played by Kim and Walker), the concert ended with Stölzel’s settings of five poems by Emily Dickenson for ensemble and soprano, The Gorgeous Nothings. They were anything but nothings.

Hassan returned in full voice, aided by the inclusion of the printed texts of the poems in the program. Stölzel, who comes from Germany but now teaches in Kansas, said in brief conversation that she came to the U.S. to get away from a musical community that still looks back for inspiration to modernism and the Darmstadt School.

“I wanted the freedom to write melodies,” she said.

Her treatment of Dickenson’s fragmentary poems made the point clearly, displaying a fusion of well-constructed support structures and a gift for melody. The five poems each incorporate different, though related sonorities as a musical key to unlocking the poem’s emotional core.