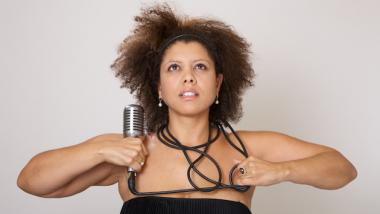 Kim Nalley doesn’t traffic in nostalgia. There’s nothing self-consciously retro or affected about her performances. But the San Francisco jazz vocalist embodies a performance ethic that’s almost a lost art. Magisterial and generous, authoritative and playful, she presides over the stage with an in-the-moment familiarity that welcomes listeners into each song.

On the first night of her two-week run at Feinstein’s at the Nikko on Aug. 2 — she returns to the room for another four nights on Thursday with tenor sax great Houston Person (joined by the marvelous jazz/blues singer Denise Perrier on Aug. 9 for a show billed as “Ladies Sing the Blues”) — Nalley stuck mostly to songs that have long been in her repertoire, with a few enchanting detours. Her voice, one of the glories of the Bay Area jazz scene, sounded as magnificent as ever, but what makes this engagement exceptional is the company she’s keeping.

Featuring pianist Tammy Hall, bassist Michael Zisman, and drummer Kent Bryson, Nalley’s longtime band is an enviably cohesive unit, with finely calibrated dynamics and instantly responsive rhythmic support. The addition of Houston Person provided Nalley with a partner who’s spent much of his career interacting with vocalists. Their flowing give and take continually brought to mind the insouciant grace of Fred Astaire and Ginger Rogers (even if Nalley’s leading role incongruously cast Person in a gown).

She opened Thursday’s concert with a seamless medley linking “Our Day Will Come,” a song she recorded on her 2002 album Need My Sugar (for which, full disclosure, I wrote the liner notes) and “The Very Thought of You.” On a swoon-inducing version of “Someone to Watch Over Me,” Person’s obbligatos echoed and amplified the ache-filled longing conveyed by Nalley, a mood that switched to sassy truth-telling with a scorching version of “Blues in the Night” that Nalley arranged impromptu on stage, signaling the band to drop out and Person to take charge with a knowing amen riff.

At 83, the tenor saxophonist has spent more than half his career keeping company with jazz’s finest singers, and it’s not suprising that a good deal of their sensibility has rubbed off on him. Influenced primarily by tenor sax great and R&B progenitor Illinois Jacquet, Houston still bears traces of the tough Texas tenor tradition that encompasses brawn and unabashed beauty.

With a thick, buttery tone and a crooner’s insinuating phrasing, Person is a masterly ballad player who can wring great drama out of familiar standards, songs for which you can bet he knows all the lyrics. He probably didn’t know every line of the Duke Ellington/Bob Russell standard “Do Nothing Till You Hear From Me,” which included several lines updated by Nalley, like the perfectly scanned “don’t believe my Facebook feed.”

Perhaps inspired by the acclaimed new documentary Won’t You Be My Neighbor? she gave a lovely, gentle rendition of Fred Rogers’s theme song “It’s a Beautiful Day in This Neighborhood,” as a duo with Hall. As much as Person elevated every song he contributed on, several of the show’s highpoints came during those Nalley and Hall tête-à-têtes, like a fine-spun version of “Trav’lin' Light” that Hall called unexpectedly followed by a galvanizing version of “Home” from The Wiz, a powerhouse performance that rare for Nalley was more Broadway than 52nd Street.

When she arrived on the Bay Area scene in the late 1980s, the most prominent jazz vocalists from the previous decade had come up under the sway of Betty Carter. Nalley looked to early sources, particularly brilliant but overlooked singers like Helen Humes, who joined the Count Basie Orchestra after Billie Holiday, and Ivie Anderson, the Duke Ellington Orchestra’s greatest vocalist. Her command of jazz and blues idioms sets her apart, but it’s her keen intelligence that adds an irresistible spark of insight and mischief to her music.

As is her wont, Nalley closed the show with a celebration of the carnal and the spiritual. An uptempo romp on Cole Porter’s “Too Darn Hot” wrung all available pleasures out of an ode to thwarted desire. With Hall contributing vocals, including some gorgeous harmonies, Nalley concluded with Dylan’s “I Shall Be Released,” a potent reminder about the ephemeral nature of all pain and pleasure.