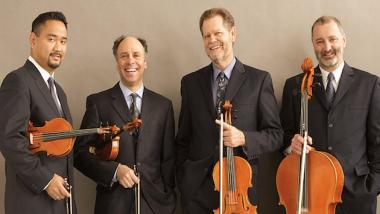 Mahler’s three great song cycles for solo voice are one of the great gifts to singers with the chops to do them justice. Starting with Lieder eines fahrenden Gesellen (Songs of a Wayfarer), and proceeding through the Rückert-Lieder (five songs based on poems by Friedrich Rückert) and Kindertotenlieder (settings of poems by Rückert on the death of children), Mahler explores beauty, love, despair, and grief with a profundity that, in artists with the ability to explore the emotional heights and depths, makes for soul-shaking listening. 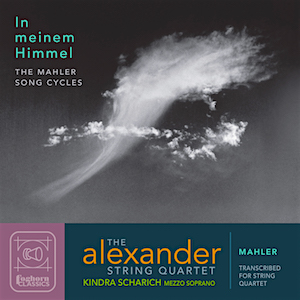 On In meinem Himmel: The Mahler Song Cycles (Foghorn Classics), Lieder Alive’s leading mezzo-soprano, Kindra Scharich, and the Alexander String Quartet, don’t quite make the grade. Scharich has a lovely voice, with a touch of youthful naivete about it that is undoubtedly quite fetching in some repertoire, but it lacks the gravitas that Mahler’s songs cry out for. You needn’t be a Kathleen Ferrier, Janet Baker, Lorraine Hunt Lieberson, Frederica Von Stade, Christa Ludwig, or Alice Coote (to name just a few of the great lower-voiced women who have recorded these songs) to do these cycles justice, but you must be able to channel the emotional devastation and grief central to Mahler’s worldview. Scharich does not.

To add insult to injury, recording engineer Matt Carr places the Alexander Quartet in the background, with minimal reverb, while surrounding Scharich in an incongruous, heavily reverberant halo. Heard in 24/192 (high-resolution) download format, the disconnect between the two radically different acoustics only underscores the inappropriate thinness of the first violin’s sound, the lack of weight in Zakarias Grafilo’s transcription for string quartet, and the lack of depth in Scharich’s voice. Sincerity, I’m afraid, is not enough.

For readers drawn to string quartet arrangements of songs and song cycles, mezzo-soprano Joyce DiDonato and the Brentano String Quartet’s recent live recording from Wigmore Hall, Into the Fire (Erato), is highly recommended as an example of how to do it right. With Jake Heggie’s moving song cycle on Camille Claudel as its centerpiece – Joyce DiDonato premiered the cycle with Heggie and the ASQ in Herbst Theatre in 2012 — it’s a perfect stocking stuffer. And it’s also available for download and streaming in hi-res.

When you first encounter the quiet, eerie, achingly stretched opening chords of Bartók’s first string quartet, you know that you are in the presence of something magnificent. That the Alexander String Quartet’s would present the complete cycles of Bartók’s six and Kodály’s two string quartets is newsworthy enough, but there is more to the story.