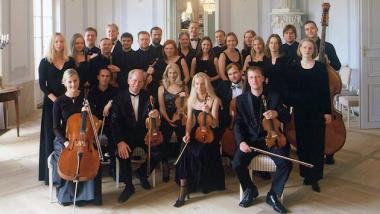 We had to lean in to hear the string players softly plucking the opening measures: jazzy yet contemporary-sounding. The thoughtfulness of opening with such a dramatically low volume worked its magic: Within a second, the audience’s pre-concert shuffling and clapping flipped to complete and silent focus. The Kremerata Baltica ensemble grabbed the attention of the Friday-night audience at Stanford’s Bing Concert Hall and held it for the rest of the evening.

The intimately quiet sounds that opened the program were just one dimension of the intimate and warm feel the ensemble built on top of their first-rate technique. The group’s camaraderie made itself manifest as the ensemble moved through the compositions specially arranged for them: Duet partners looked at each other as though they were conversing, the double bass players bobbed their heads in unison, and the group’s leader, Gidon Kremer, stood in front of them as though he was leading a big band. He was turned towards the audience, violin in hand, occasionally turning to acknowledge another soloist or climactic moment coming from the group. These moments sprang naturally from performers’ impeccable ensemble playing and resonated in the sparkling, clear acoustics of the hall.

Kremerata Baltica’s convivial playing and camaraderie never seeped over into overly sentimental playing: There was no excess rubato, no drawn out slowing tempos to end movements, no theatrical acting. Instead the ensemble played with extreme precision and heart, making any slight imperfections irrelevant.

The opening piece of the program, an arrangement of Philip Glass’ Orpheus Suite, was the pinnacle of the concert as it best combined the ensemble’s warm but direct playing with thoughtful arranging. Andrei Pushkarev’s arrangement for strings and percussion is based on Paul Barnes’ earlier arrangement for solo piano of Glass’ 1991 opera. Kremer and the ensemble beautifully executed Pushkarev’s sensitive instrumentation and writing: mallet percussion accompanying plaintive violin solos, simple yet emotionally moving string duets, ever-so slight variants in repeated sections, gorgeous double bass lines, and stunningly effective use of tubular bells. Each movement presented unexpected and joyful surprises.

The other notable item on the program was Giya Kancheli’s Chiaroscuro, specially arranged for Kremerata Baltica by the composer. The piece alternated between dramatic, percussive moments accompanied by dissonant strings and otherworldly, weightless-feeling sections that were occasionally interrupted with gestures of more traditionally lyrical writing. The composition’s sound was something between contemporary art-film soundtracks and sombre, spare sacred music suggesting a collaboration of Michael Nyman with Arvo Pärt. The ensemble played it impeccably, and the ethereal sounds from Kremer’s violin at the close of the piece were breathtaking.

While the ensemble’s performance quality continued unabated after the intermission, the quality of the arrangements they performed was less than ideal. Alexander Raskatov’s The Seasons’ Digest, based on Tchaikovsky’s piano pieces The Seasons, added the bonging of a prepared piano, an out-of-tune bugle call, would-be dramatic drones in the strings, recording playback, and the circus-like sounds of the slide whistle. But none of these elements were seamlessly incorporated into the arrangement: They came across as surplus and strangely out of sync with Tchaikovsky’s writing. It was as though the piece was arranged for strings and sound effects. Much to the performers’ credit, the Kremerata Baltica pulled off every one of those sound effects and seemed to win most of the audience over with their spotless playing.

Leonid Desyatnikov’s arrangement of Astor Piazzolla’s The Four Seasons of Buenos Aires presented similar arrangement problems as jagged incorporations of Vivaldi’s Four Seasons at times came across as kitsch, distracting from Piazzolla’s succulent melodies and captivating rhythms. Yet here again, the Kremerata Baltica played with such skill that they sounded like a single instrument, especially in the piece’s tightly performed tango grooves.

Gidon Kremer and the Kremerata Baltica made us feel like royalty with their virtuosic ensemble playing, friendly ethos, and varied, contemporary programming. Though some of the arrangements were more engagingly written than others, the performers played each one as though it were a gem.