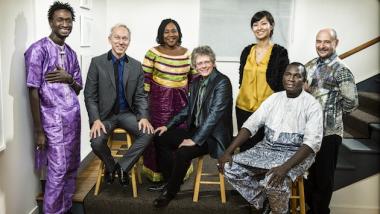 If the Kronos Quartet was looking for confirmation that their fifth Kronos Festival had taken the pulse of our cultural moment, they found it in an unorthodox way. Hawa Kassé Mady Diabaté, a Malian griot who was one of the festival’s star soloists, bowed out because of difficulties getting a work visa.

Diabaté, who has performed in the U.S. many times previously and is a member of Trio da Kali, a griot “supergroup” formed specifically to record the album Ladilikan with the Kronos Quartet (in 2014), was subjected to the new “extreme vetting” form by U.S. Citizenship and Immigration Services, which substantially increases the information required to process and approve a visa request, and as a consequence, she was not issued a visa in time for the festival.

Perhaps this is to become a regular feature of arts presentations in the U.S., the pre-concert announcement/explanation of a musician’s or group’s absence. In the larger picture, if such a policy were implemented widely enough, it would probably significantly deter artists from making plans to travel to the U.S.

In the short term, the concert went forward, with the San Francisco Girls Chorus Premier Ensemble singing Diabaté’s Tegere Tulon (handclapping songs), with the quartet joining in with arrangements by Jacob Garchik. We missed Diabaté’s voice, which was intended, by Kronos, to connect with the recordings of Mahalia Jackson featured on the festival’s first night (in Stacy Garrop’s Glorious Mahalia). The festival would thus have been bookended by two powerful women singing in different traditions but connected by the power and quality of their voices: an African singer connected to an African American.

It’s an appealing idea, and one that gets to the heart of why Kronos pursues folk and non-Western musical partners in their work. If much classical music for centuries has taken folk music to its heart, it has also often erased or failed to preserve the original music that becomes an element of a classical composition. (And that bespeaks a cultural hierarchy in which classical musicians were at the top and other musicians were thought of as less sophisticated or important.)

With more than a century of recording behind us, we are now all sophisticated enough to realize that the actual sound production of musicians in different traditions is part of the music and that these traditions do require dedication and high levels of musicality. And one of the problems, or joys, that comes with these realizations is that making convincing music while crossing traditions requires more knowledge, more collaboration, and has become much more difficult. Kronos engages that process with a will, hence the need for a festival.

Not all of the music made at this year’s Kronos Festival was successful, but you get the sense that the process was as important as the result, and that makes Kronos Festival more experimental and thoughtful than it gets credit for. Kronos makes a good partner in this effort: they don’t take star turns, but willingly cede the spotlight.

Diabaté’s work, part of Kronos’s Fifty for the Future learning repertoire, does require a girls’ chorus, so I’m not sure how many young quartets will be waiting to give performances of it, but even without the griot’s voice it’s an engaging work. The composer investigated a tradition of village handclapping songs, created spontaneously by girls, and wrote four of her own, which include movement and clapping patterns. The S.F. Girls Chorus ensemble, whose powers of learning music and languages quickly is astonishing, came through like new-music veterans. Like the best of folksong, Diabaté’s songs were memorable but also complicated enough in their internal workings to bear repeating.

The masterpiece on the concert was Aleksander Kościów’s Hílathi, a work based on the cathartic cry “have mercy on us,” familiar from a Christian prayer, but far more widespread than that. The festival premiered the choral version with the S.F. Girls Chorus. Kościów’s work is so concentrated that it basically comes out of one melodic idea, but we keep going deeper and the texture thickens as the anguish breaks out in fortissimo chordal ejaculations. You do experience catharsis, and then the third, lyrically flowing section brings the piece to a quiet close. The choral version is slightly different, and features SFGC’s music director Valérie Saint-Agathe providing bass drum percussion beats at the climax. But the main difference is the addition of the girls’ chanting, which makes the piece both more personal, in that the cries are coming from people, and more hieratic, because the chant brings with it associations of religious ritual.

The second half of the concert was a tribute to Pete Seeger, as this is the 100th anniversary of his birth. I would like to say that this section came off brilliantly, but it was tentative and probably under-rehearsed, and folk artists Lee Knight and Brian Carpenter were underutilized and holding back. Thank goodness for Meklit, a magical vocalist whose singing of Zoe Mulford’s “The President Sang Amazing Grace” was the emotional highlight. She and the girls chorus powered a somewhat intimidated audience through a singalong of “We Shall Overcome.” It would’ve been great to have Diabaté’s voice added to that number.

A sense of coming together and the power of the collective underline the quartet’s fifth annual festival.