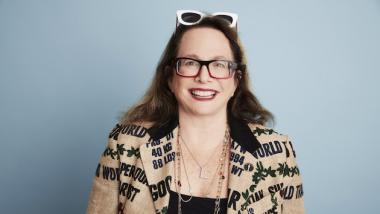 The Hollywood Bowl season has always relied on catch-all programming. But Thursday’s world premiere of Laura Karpman’s All American (commissioned by the Los Angeles Philharmonic) and conducted by James Gaffigan, literally threw in the kitchen sink, alongside a meat tenderizer, a butcher block, various pots and pans, and a Dutch oven played as a percussion instrument.

This clever use of domestic instrumentation (stereotyping aside) was meant to reflect the work’s source material of melodies penned by three women composers: Mildred “Happy Birthday to You” Hill, Emily Wood Bower, and Anita Owen.

“I set out looking for patriotic songs by American women composers,” Karpman explained in her program notes. “Much to my own surprise, I found not one or two, but hundreds!”

However clever Karpman’s instrumentation may be, it was lost in the vastness of the Bowl, and lazy camera work failed to focus in on Karpman’s culinary soloists. The playful aspect of the performance and the sonic uniqueness of the “instruments” was all but lost.

The real irony, however, is that even though Karpman’s five-minute work is based on tunes by women, her orchestral treatment shares a lot more in common with Aaron Copland, Leonard Bernstein, and Elmer Bernstein. Composed in 6/8 plus 7/8 time — a syncopation that Gaffigan described as “walking with one leg shorter than the other” — was just getting going and it was suddenly over. According to a friend who spoke with Karpman at intermission, she plans to do an expanded version. But for now, as Porky Pig says, “That’s all folks.”

Some conductors are uncomfortable with the wide-open spaces of the Hollywood Bowl. Not James Gaffigan. He had a grand time Thursday interacting with his audience, leading them in round of “Happy Birthday” for his daughter, Sophia, and conducting the members of the LA Phil.

Following Karpman’s mini-premiere, he conducted Copland’s Appalachian Spring Suite; the Violin Concerto by Samuel Barber with James Ehnes as soloist; ending with the sophisticated, big-band-style rhythms of Duke Ellington’s Harlem — a work that gave the Philharmonic’s large brass, reeds, and percussion sections a chance to really show off their chops.

The vicissitudes of the Bowl’s amplification system were not particularly friendly to the chamber-size orchestration of Appalachian Spring.  The speaker system added a brittle edge on the strings and overly emphasized the sectional voicing like old time stereo recordings.

Gaffigan offered a leisurely journey through the score. It was gentle, panoramic, as nostalgic as postcards from another time. Unlike Karpman, who never had time to make the melodies of her women composers sing, Copland knew he had a winner with “Simple Gifts,” and developed the Shaker hymn as a centerpiece. It’s forgivable that there was the inevitable audience hum-along.

It was a treat to hear Samuel Barber’s 1939 concerto. It’s a splendid, all too often overlooked composition filled with a wealth of melodic evocations and variations, mood shifts between major and minor key tonalities, and an abundance of demanding star-turns for the soloist.

The opening Allegro develops a haunting melodic refrain. But it is in the second movement, Andante, where Barber’s flair for vocal writing takes over and unfolds like an extended operatic aria. It all comes to a firecracker finale in the final movement, Presto, with the violinist racing from one end of the instrument’s range to the other. Ehnes played the concerto beautifully, balancing Barber’s unique romanticism with plenty of virtuoso flair. His instrument was also marvelous — the 1715 “Marsick” Stradivarius.

To end the concert Gaffigan cast away his baton in favor of dance-like hand gestures as he and the orchestra went Uptown for the performance of Ellington’s 1950 symphonic jazz poem, Harlem.

You have to remember, when the LA Phil musicians are not on stage at Disney Hall or the Bowl, many of them do session work for film, television, and now, video-game scores. They can play anything. But give them a chance to show off their jazz licks and they’ll jump at the opportunity. Which is exactly what they did, with those big Ellington brass section chords, clarinet, trumpet, and saxophone solos leading the way.

Ellington also wove into Harlem an homage to the roots of jazz. So there is a section that harks back to the traditional jazz of Bourbon Street and the pulsing mambo beat of Afro-Cuban music.

It was pretty cool.

Hélène Grimaud and the S.F. Symphony Try a Little Tenderness With Beethoven

James Gaffigan steers the orchestra in intriguing directions in a concert ranging from Mozart to Barber.

An artist who defies the stereotype: To play the violin and then the viola? James Ehnes sounds brilliant on both.