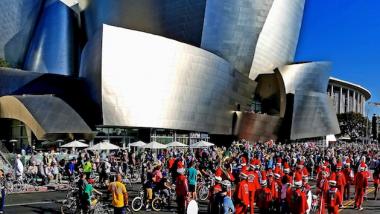 When the Los Angeles Philharmonic celebrated the beginning of its 100th season on Sept. 27, the gala concert didn’t feature Brahms or Beethoven. There was no superstar soloist. Instead there was music by John Adams, Frank Zappa, an LA Phil commission premiere by Julia Adolphe, music from the movies, the Doors, and the Beach Boys. The orchestra gets down to serious concertizing Thursday with the premiere of a major new work by Andrew Norman, Sustain.

A good deal of the LA Phil’s success is based on throwing out the standard playbook and coming up with new, inventive, community inclusive ways to get people involved. That was certainly the motivating force behind the creation of Sunday’s Celebrate LA! — an eight-mile long, totally free block party that stretched from the Walt Disney Concert Hall all the way to the Hollywood Bowl. It was produced in collaboration with CicLAvia, a people power program that periodically opens long stretches of L.A. streets to bike riders.

The route wound its way from downtown, through Hispanic MacArthur Park and Koreatown, past Paramount Studios, all the way to the Hollywood Walk of Fame and the Capitol Records building. It was estimated that 1,800 dancers and musicians from all over the city (and beyond) took part, from the Jazz at Lincoln Center Orchestra with Wynton Marsalis and the “Syncopated Ladies” tap ensemble to Korean and West African drummers to members of the LA Philharmonic and its youth program, YOLA.

It was a musical collision of epic proportions that speaks to the present moment, with its endless sense of serendipity and cross blending of musical styles as festive Oaxacan parade overlaid a sidewalk gamelan orchestra. Add a constant stream of crowd chatter, ambulance sirens, and food truck vendors and you get the idea.

I strolled (not biked) the entire eight miles with L.A. Times music critic Mark Swed, who felt compelled to do an impromptu, reverential performance of John Cage’s 4’33” in front of Good Samaritan Hospital where Cage was born.

From 8:30 in the morning until four in the afternoon swarms of bicyclists pedaled by (in both directions) and pedestrians congregating at the six “hub stages” that offered an ongoing succession of performances. There was a lot of comparing of experiences: “Did you see the taiko drummers? No. Did you see the LA Phil players? Yes. Did you try the pupusa food truck?” “Excellent.”

Just as the Philharmonic’s inventive “Noon to Midnight” marathon is designed in such a way that no one can see everything, Celebrate LA was a birthday party for the city that everyone experienced differently. And if it introduced the Los Angeles Philharmonic to an entirely new audience, all the better.

Is the Symphony Orchestra an Endangered Species?

The evolution of the Los Angeles Philharmonic presents a more hopeful view. Part II of LA Phil at 100.